The senator representing Adamawa North, Elisha Abbo, has said that he is still the candidate of the All Progressive Congress in the forthcoming 2023 general elections, despite a court ruling that sacked him as the party’s flag bearer on Monday.

Abbo on Wednesday exclusively told that the court ruling had no basis and such should not be taken seriously.

A High Court in Yola sacked Abbo as the senatorial candidate for Adamawa North in the forthcoming general election, stating that he had been expelled by the party and should therefore not be recognised as such.

The judge, Justice Danladi Mohammed, ruled that Senator Abbo was not entitled to seek re-election since he had been expelled by the party.

The judge ruled that the senator and APC are bound by the resolution of Mubi North Local Government executives of the party dated, October 7, 2022, which expelled the lawmaker, thus, he is not entitled to enjoy any right or privilege accorded to APC members.

The state chapter of the party had in October expelled Abbo over anti-party activities following his open criticism of the Muslim-Muslim ticket for the party’s choice of presidential and vice-presidential candidates.

In his response to his sacking as the party’s candidate,  Abbo said the court ruling was the handiwork of desperate politicians who don’t know when to give up.

He said, “It’s not a serious thing though, they only wanted to draw media attention and publicity because I am involved. Outside of the media attention, it is absolutely nothing; I am neither bothered nor worried because they do not have a case against me.”

The lawmaker said he would take the case to the Court of Appeal and also called on his supporters to disregard the ruling.

He said, “You can imagine a state High Court assuming jurisdiction against the Independent National Electoral Commission.

“Agitating over an ongoing case in the Federal High Court, the truth is that they have delivered their judgement which is what the Peoples Democratic Party wanted in collaboration with some people in the APC.”

Abbo also added that the necessary parties were not involved in the court ruling, hence the ruling held no ground.

He said, “They have delivered their judgement without involving the INEC, because in this case as it is, INEC is a party and the National Chairman of the party is also a party.

“All they are doing is just noise and that is where it would end. I am still the candidate of the party and I am the one holding the party’s mandate.”

The Adamawa senator said that he doesn’t take the court ruling seriously, but in order to set precedence so that no other person tries such with others subsequently, he’d appeal the court ruling.

He said, “I will appeal so that tomorrow, when someone is a candidate of the party but because the state chairman of the party isn’t comfortable with such a person, they would not start threatening such with impeachment.

“I will appeal the case in order to serve as a deterrent to others and not set an evil precedence. Our democracy in Nigeria is a growing democracy, it hasn’t still matured, and we are still monitoring our democracy.

“The judiciary is a part of any democratic process and to ensure that democracy grows, we have to find a way through which we can continue to dispel this kind of cases so that they won’t try it with someone who doesn’t know what to do or where to go, so that is why I am going to the Court of Appeal to set this aside.

“You cannot assume jurisdiction over INEC as a state High Court. I am still the candidate of the party and that stands as it is.”

Wading in on the powers of the state court to sit over the case, a senior Advocate of Nigeria, Femi Falana, said that the Electoral Act could not supersede the provisions of the power of the Constitution.

Falana said, “He has said he’s going on appeal, the appeal court will decide that. I don’t agree with him that the state High Court does not have the power to preside over the case.

He added, “The attempt by the National Assembly to hijack the powers of the state High Court is subversive of the tenets of federalism.

“Without amending the Constitution, the powers of the state court cannot be eroded.”

In a different opinion to his colleague, a senior lawyer, Rasheed Adegoke, noted that although the Constitution was supreme, electoral matters as such were right to have been presided over by a  Federal High Court.

He said, “If the case can be described to be a pre-election matter, in respect of which a person’s candidature is being challenged, then it ought to go to the Federal High Court and not the state High Court.

“If he challenges the jurisdiction of the state High Court on that basis, it would make a lot of sense.

“And considering the grounds upon which they are proceeding, except if a person has a fuller detail, but from what I have known, I believe the state High Court might not be able to hear the matter.”

“It would be an abridge of the court process and ousted by law because the Electoral Act only vets electoral matters in the Federal High Court, so it should be outside of the state High Court to entertain,”  Adegoke added.

A check by our correspondent on the INEC website showed that Abbo’s name was still on the website as the senatorial candidate for APC Adamawa North. 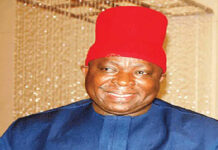 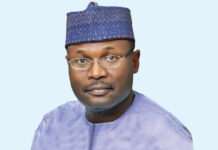 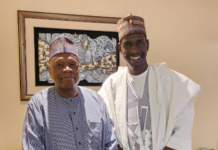