The Divisional Police Officer in charge of Pankshin Division, Pankshin Local Government Area of Plateau State, has been kidnapped by gunmen, The PUNCH learnt on Thursday.

A policeman in the council area confirmed the development to The PUNCH in Jos, Thursday night.

According to him, the DPO, whose name is yet to be known, was kidnapped by the gunmen after they shot him in his hotel room in the council area.

The source said, “The DPO was just posted to Pankshin about three days ago. He was staying in a hotel in Pankshin and was in that hotel when the gunmen came and shot him before taking him away. Since then, we have not seen him.”

As of the time of filing this report, the Police Public Relations Officer in Plateau State, DSP Alfred Alabo, had yet to respond to calls made to him. 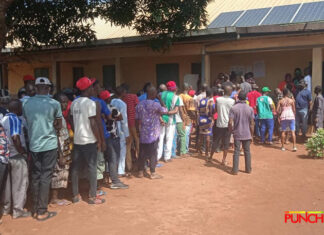