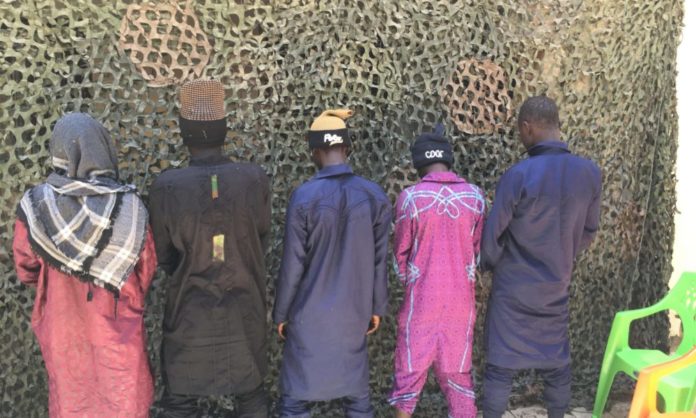 One of the over eight thousand Boko Haram terrorists fighters who have just surrendered to troops in Borno State have told of why he stopped fighting fir the terrorists Groupon and surrendered to soldiers of the Nigerian army.

He said came out of the bush where he had been for six years carrying out violent attacks with with the terrorists owe to misinformation by the group.

The suspect who is currently undergoing profiling at one of the Nigerian Army Facilities in Borno State, said they were fooled into joining the terrorists group in the first place. He said the terrorists used religion, intimidation and threats to get them recruited into their folds.

The suspect names withheld for security reasons assured those doubting their sincerity of true repentance that there was no cause for alarm as they have truly repented. He said God knows their hearts and sees the sincerity that they would never go back to their vomit.

The repentant terrorists who described life in the bush as hellfire and nothing to write about, confessed that they would have surrendered a long time ago but that they were afraid of being killed by soldiers, thus forcing them to remain with the terrorists against their wish.

The suspect who spoke in Hausa language, said he was able to overcome those fears a few days ago when he and his family surrendered to troops. He said life has been good to him and his family since he took that decision.

He said “I joined the terrorists group six years ago and have remained in the bush as a slave because you don’t have your freedom.

“I would have surrendered a long time ago but I was afraid that if I come out of the bush the soldiers would kill so I had to still remain with the terrorists.

I realized that I was being misled, misinformed into fighting and taking arms against my own people and I am happy now because I am been treated with dignity and I am appealing to my former colleagues to drop their arms and above mbrace peace and they would not be killed. I have a wife and I came out with her.

I suffered in the bush our commanders misled us that we were fighting a just course and we hardly eat good food. when I surrendered the civilian JTF that I first met did not harm me. Many of my colleagues who are still in the bush are willing to come

Out. If I had their phone numbers I would have called to assure them to come out that nothing will happen to them. He told journalists who are on tour of the counter insurgency operations in the north east with the Director army public relations in Borno State.

During a visit to the brigade at Bama, the commander 21 Special Armored Brigade, Brigadier General Adewale Adekeye told the media team that since the commencement of the surrendering of the Boko Haram fighters in July, thousands of fighters, their families and supporters had been received.

In an interview with journalists, Adeleye, said there was no cause for Nigerians to be afraid of the mass surrendering of terrorists. He assured that the Adekeye said the theatre command was aware of the fears and apprehension that the recent event had generated among the civilian populace in Borno and the nation at large.

He explained that surrendering was a normal practice in the annals of the history of warfare, saying it had been a time honoured event.

He said all army units IMN he north east had been instructed on how to receive the surrendering terrorists, process them and evacuate them to Bama main holding cell for further processes after which they would be handed over to the Borno State government.

He said in the law of war, when somebody surrenders to you, there are things you are expected to do and that are what the army has been doing.

According to him, “The number of insurgents that have surrendered is quite large but, however, most of them have been processed and moved down to the holding facility organised by Borno State Government in Maiduguri.

“But we are the first point of call for these insurgents coming down from the bush and therefore, many responsibilities are bestowed on us being the first contact to profiling them,” he said.

The Brigade Commander said the surrendering events had been taking place within Bama Local Government Area of Borno given its large size and proximity to Sambisa Forest.

For sometime now members of the Boko Haram/ ISWAP group have been surrendering to troops in the north east who have intensified operational onslaught on the terrorists.

The tour organized by the army headquarters is for journalists to have a first hand information of the repentant terrorists on why they surrendered their arms.

The tour is also aimed at allaying the fears of the public over the mass surrendering of the terrorists which many perceived to be deceitful considering the number of people they have killed, maimed and destroyed their ancestral homes.