Former governor of Borno state, Senator Ali-Modu Sheriff (SAS), has formally announced his withdrawal from the All Progressives Congress (APC) national chairmanship race ahead of the party’s national convention this week.

Announcing his withdrawal at a press conference in Abuja on Sunday, he said that it was in obedience to the decision of President Muhammadu Buhari and the ruling party to zone the ticket to the North Central geo-political zone.

He said that he will however renew his interest should the leadership of the ruling party change the decision on zoning and announce the extension in the sale of the nomination forms.

“I am sure most of you are following the trends of activities of our party within the last 10 days or so. The party has taken decision that the position of the national chairman should go to the north central. Meaning, it is exclusively zoned to the contestants of the North Central Zone.

“And the President has taken a position. I have always told you that I will contest if it is zoned to my zone. That has been my statement always. And today they have taken a position, I respect the president. I respect him as a person and as a president he is my leader. He must have a reason for allowing the party to zone the chairmanship to North Central.

“I don’t want to draw battleline. I respect the President and unless the party come out between now and Friday to say that, no, we have changed our mind, it is now open. In that respect also they are obliged to allow everybody to pick a form. Therefore, I don’t want to oppose the president in any way or form. I respect him. I will abide by the decision of the party that it is exclusively zoned to North Central,” he said.

Speaking further, SAS as he is fondly called added that: “normally, zoning revolves around a person, you don’t zone in vacuum. And they must have a reason it is zoned. And in party congresses and convention there is what is called a unity list. On the last day of the convention, when the leaders make up their mind, they will bring out one list.”

“And in that respect, the list will be followed by the participants because parties are made up of men and woman who are also coming from the zones and states. Therefore, because of my respect for the leadership of President Muhammadu Buhari, and the party, I will not contest unless they have changed their mind between now and Friday.

“Otherwise, I will not offer myself for election when it has been clearly zoned out of my zone. I want to thank men and women of Nigeria, because we have been on the field for two years. And my campaign has resonated all over Nigeria. From Abuja to Borno, from Borno to Ibadan, which is the border from Ibadan to Birnin Kebbi. It has resonated. “People have shown a lot of interest in what we are doing and I thank all of them. It is not my fault. It is something that you have to follow the rule of law. For anybody doing otherwise, I don’t think it is correct. So, I want to let people know that this is the position. I, Ali Modu Sheriff, will not offer myself for the contest on Saturday because it has been zoned out of my zone.

“I am from the Northeast. North Central is made of Kogi, Kwara, Benue, Nasarawa., Plateau States. These are the places where chairman will come out from. Borno State is Northeast of Nigeria. Therefore, that’s the position as of today and I want you to communicate to all of our followers, men and women, all over the country so that they don’t expect to see my name on the ballot paper.

“But, if the party changes his mind from today to Friday and say, everybody in between 12 hours, you can fill up a form and when the contest but as long as it remains that it is North Central. I am not going to be party to that. Thank you very much,” he said. 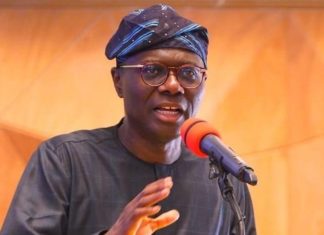