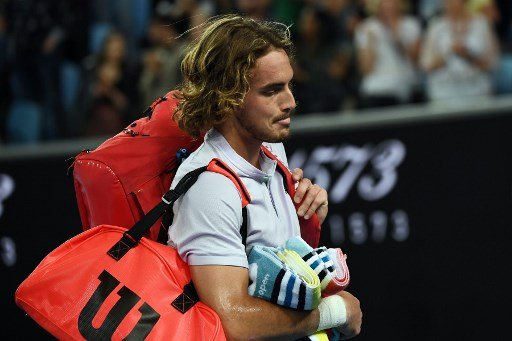 FILE: Greece’s Stefanos Tsitsipas walks off the court after losing to Canada’s Milos Raonic in their men’s singles match on day five of the Australian Open tennis tournament in Melbourne on January 24, 2020. (Photo by Manan VATSYAYANA / AFP) / IMAGE RESTRICTED TO EDITORIAL USE – STRICTLY NO COMMERCIAL USE

Stefanos Tsitsipas worked up a sweat in his two-and-three-quarter-hour loss to Alexander Zverev in Saturday’s semi-final at the ATP and WTA Cincinnati Masters.

And the glistening Greek can’t understand complaints about his leaving the court to change clothes.

“Nothing crazy. It’s not astrophysics,” Tsitsipas said after exiting 6-4, 3-6, 7-6 (7/4) to his German rival, who was clearly annoyed by the eight-minute interruption in play at the end of the first set.

“I’m heading towards the locker room to go change my T-shirt. I don’t think it would be very nice if I change shorts on the court in front of everybody,” Tsitsipas said.

The world number three added: “I’m a person that sweats a bit more than others. I think it’s acceptable, it’s just how it works for me.”

Suspicions have been raised that such a break — Tsitsipas carried his full clothing bag off court — might be an opportunity for some sneaky coaching via text.

No sooner had that possibility been mentioned on an international television feed than the shot switched to father-coach Apostolos texting on his phone in the player box.

However, the younger Tsitsipas said he will not change his ways.

“I’m not going to stop doing it, because it makes me feel  better when I step out on the court to begin the new set,” he said of leaving the court to change.

Tsitsipas may have been pushing his luck when — after barely 90 minutes of play and one lengthy change already — he tried to leave the court again for the same purpose after winning the second set.

But the expedition was stopped by the chair umpire who said he had used up his quota of break time.

“I somehow managed it (to play while sweat-soaked)  but it wasn’t nice of him. I will check the rulebook later,” Tsitsipas said.

“A player shall be allowed to go to the bathroom in each single set, as far as I know.”

He added: “We are trying to play tennis out there, obviously sweating a lot, giving our best effort and our effort is not really being appreciated.

Zverev took a dim view of the lengthy pause in play, complaining to the chair umpire.

“Some people use it (the break rule) for their advantage,” he added. “The rules are very bendable, I would say.