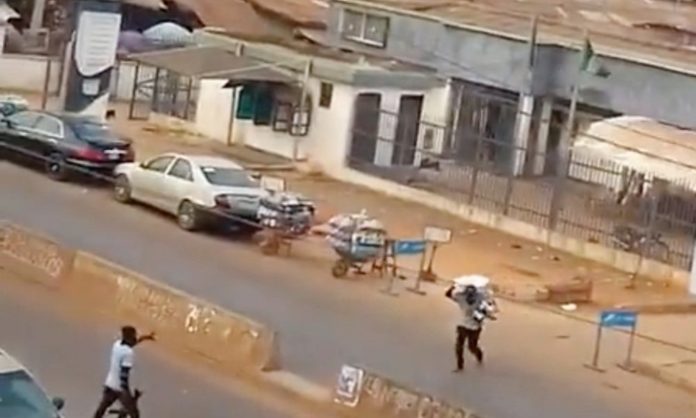 Uromi in Edo State, on Thursday, witnessed one of the most daring bank robbery in Nigeria’s recent history.

More than 20 armed men attacked the town, under Esan North-West LGA in broad daylight, and operated for about 2 hours.

Explosives were used to breach the banks’ entrance, while packages of money were carried out and stuffed in different cars.

Photos and videos on social media show the level of carnage and murder of Nigerians, including security officers.

The number of casualties are unknown but figures provided by eyewitnesses suggest no less than 7 deaths; others sustained injuries.

The residents accused the police and other security agencies of abandoning them. One footage shows two soldiers taking cover amid gunfire.

The robbery and killings elicited outrage from Nigerians, wondering how the assailants operated freely.

Bello told DAILY POST on Friday that personnel of different security agencies had been deployed to the area.

“The incident that happened yesterday is true. There was an attack on four commercial banks and the police division in that area.

“The Commissioner of Police has sent reinforcement from the State headquarters to beef up security and to ensure the fleeing gang of criminals are arrested.

“And also ensure peace and order are restored to the town. The police and others security agencies are ensuring that happens.

“The Commissioner and the management team have moved to the site for an on-the-site assessment of the damages and losses”, the PRO disclosed.