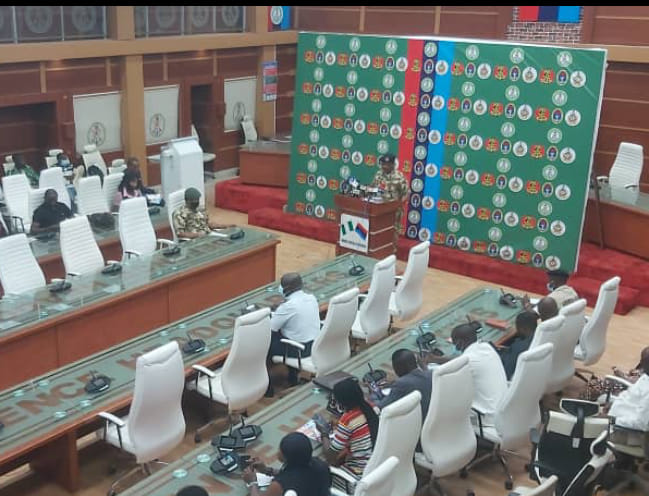 The Defence Headquarters (DHQ) has said military operations conducted in the last three weeks has led to the killings of 120 terrorists and other criminals and the arrest of fifty others.

Director Defence Media Organization, Major General Bernard Onyeuko who made this known at a media briefing in Abuja, said the soldiers also recovered various assorted arms, ammunitions, gun trucks and other dangerous weapons within the period and rescued 38, abducted persons.

He further stated that troops on internal security operations in the Niger delta recovered a total of 2,531,000 litres of illegally refined Automotive Gas Oil and 2,807,000 litres of stolen crude oil.

1. Own troops consolidated their operational success against Boko Haram and Islamic State West Africa Province Terrorist (ISWAP) in the last 3 weeks. Some of the areas which the operations were conducted are; Bama, Gwoza, Monguno, Kanduga, Damboa, Damasak, Gudumbali and Nganzi Local Government Area. Kukawa, Chibok as well as Sambisa Forest, Kirta Wulgo in Marte Local Government of Borno State. Troops also recorded significant results at various locations in Adamawa and Yobe State around Goniri in Gujba Local Government Area of Yobe State. Notably the air interdiction at eliminated several ISWAP Commanders and their fighters during the encounter. An ISWAP senior commnander Mallam Ari, the Amirul Fiya in charge of Kirta Wulgo and some foreign mercenaries fabricating Improvised Explosive Device for the terrorist were killed during the airstrike. Relatedly, the Air Component conducted air strikes on ISWAP enclaves at Abbaganaram, Bukar Mairam, Chukum Gudu and Jubilaram in Marte Local Government Area neutralized scores of terrorists including high profile Commanders while about 25 Terrorists got drowned in the lake in an attempt to escape the bombardment. The ISWAP armoury and warehouse were also destroyed and arrest of several terrorists recovery of assorted arms, ammunition and captured their gun trucks and other weapons. Also, livestocks and other items of security concern were recovered as well as rescued abducted civilians.

2. Cumulatively, the troops within the period under review, neutralized 120 fighters, arrested 50 of the terrorists, 5 gun trucks, 50 assorted arms and 200 rounds of different calibers of ammunition were captured from the terrorists. Additionally, troops rescued 25 abducted civilians. Similarly, a total of 965 terrorists and their families and 550 children surrendered to own troops deployed at different location including: Gamboru, Tumbumma, Kukawa, Baga, Gwoza, Mallam Fotori, Damboa, Kirta Wulgo, Bun Yadi, Gujiba, Madiya all in Borno and Yobe State. It is noteworthy to state that out of the 965 terrorists that surrendered within the period under review 104 are from ISWAP Camp that surrendered to own troops at Marte. The surrendered terrorist have been properly documented and handed over to the appropriate authorities for necessary action.

7. Accordingly, in the last 2 weeks, troop discovered, and destroyed a total of 45 illegal refining sites, 72 cooking ovens, 127 metal storage tanks, 30 dug out pits, 23 cotonou boats, 47 pumping machine, 9 tankers. Consequently, a total of 2,531,000 litres of illegally refined Automotive Gas Oil and and 2,807,000 litres of stolen crude oil were recovered in the course of the operations in addition, 20 coolants, 9 tankers were recovered. Also, 50 galvanized pipes illegally connected to pipelines were excavated, 12 economic saboteurs associated with pipeline vandalization were arrested within the period. All the apprehended criminals and recovered items have been handed over to the appropriate authorities for further action.

8. Finally, I wish to convey the appreciation of the Military High Command to our troops in the frontlines of operations in the various theatre for their sacrifices in combating the various security challenges confronting the nation. The general public is highly appreciated also, for the cooperation given the Armed Forces of Nigeria and other security agencies in the course of our operations. Gentlemen of the press, I also convey the appreciation of Military High Command for your immense support and further encourage all to continue to avail security forces with credible and timely information that will aid our proactive operational engagements in the Country.