The Abuja division of the Federal High Court has now moved the trial of detained leader of the Indigenous People of Biafra (IPOB), Nnamdi Kanu, to June 28, 2022, as against the May 26 date earlier fixed by the court.

Daily Sun gathered that the new date has already been communicated to all parties to the trial. The development, Daily Sun learnt, was necessitated by the fact that the trial judge, Justice Binta Nyako, will not be available for today’s date as she is presently indisposed.

The court had fixed today to continue further proceedings on the treasonable felony charge the Federal Government preferred against Kanu.

This was after the court had refused to release the IPOB leader on bail, pending the determination of the charge against him.

In her ruling, Justice Nyako insisted that Kanu must explain why he breached the previous bail that was granted to him, before he could enjoy another favourable discretion.

“However, the defendant is at liberty to refile the application,” Justice Nyako held.

She, however,  adjourned to rule on an application Kanu filed to challenge the revocation of the bail the court earlier granted to him.

Kanu is further urging the court to set aside the order it made on March 28, 2019, which not only issued a bench warrant for his arrest but, also, gave federal government the nod to try him in absentia.

The IPOB leader told the court that contrary to the federal government’s allegation that he jumped bail, he fled for his life after his home town at Afaraukwu Ibeku in Umuahia, Abia State, was invaded by soldiers, which he said led to the death of 28 people.

He attached eight exhibits, which included photographs, as well as an affidavit he deposed to from Israel after he fled the country.

A statement by its spokesman, Emma Powerful, explained that the action was due to yesterday’s deferment of Kanu’s trial by the Federal High Court in Abuja to June 28. 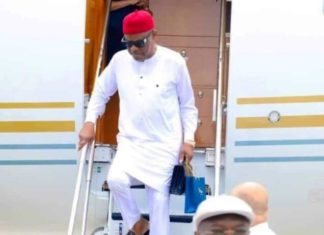