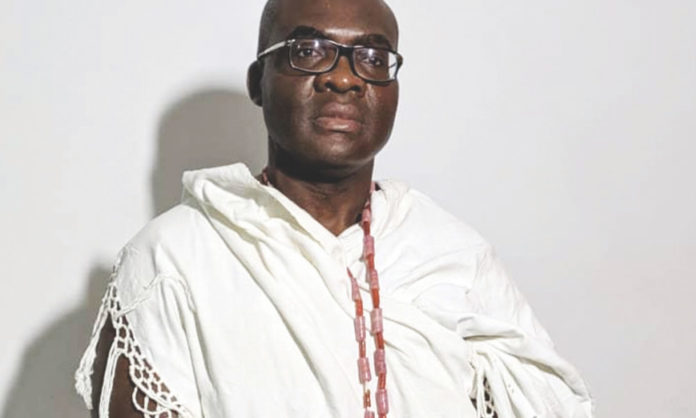 Uneasy calm pervades Ogwashi-Uku in Aniocha South Local Government Area of Delta State, as the traditional ruler of the kingdom, Obi Ifechukwude Okonjo II, takes a bold step to re-possess the ancient palace of his forebears after a protracted legal battle within the royal family.

The legal battle which lasted for about 23 years was to determine the occupant of the hereditary stool between the Umudei lineage and the Umuobi Obahai lineage.

The battle came to an end on November 21, 2021, when the Supreme Court dismissed the appeal filed by Umudei, and affirmed the judgment of the lower courts that the stool belonged to the Umuobi Obahai royal lineage.

It was learnt that the High Court in the judgment of 2007, also granted a warrant of possession of the property of the royal family including the ancestral palace of over 150 years old to the Umuobi Obahai royal family.

Armed with the warrant of possession, court officials from Asaba, accompanied by security operatives arrived at the palace for execution but were reportedly resisted by armed youths, leading to reinforcement on the part of security operatives.

The overwhelming presence of security repelled any attack from the armed youths, hence, the court officials were able to execute the warrant of possession.

Addressing the people of Ogwashi-Uku shortly after the exercise, Obi Okonjo II said there was no victor, no vanquish, noting that the royal family was one, even as he extended an olive branch to aggrieved extended family members.

Obi Okonjo II who is the brother to the Director General of World Trade Organisation, Mrs Ngozi Okonjo-Iweala, however, warned that the palace would no longer tolerate acts of mischief and brigandage, but insisted that he would be fair and firm in his actions to develop the community.

“We come in peace, we mean no harm to anybody, all the people here are our brothers, my subjects, and I intend to deal with everybody fairly. We are not going to continue to fight, this place is going to move forward.

“It is my hope that they would listen and come knowing that we are all related in one way or the other. For us, it is a victory for Ogwashi-Uku not for the Umuobi Obahai alone because we are going to chat a course to develop this kingdom.

“We are going to work with everybody, nobody is an enemy here. Obviously, when you are defending your interest, you do so with so much zeal but now that the storm is over, we can all come together as one.

“Everybody in Ogwashi-Uku has a stake in this palace, and we will deal with everybody fairly, kindly and forthrightly. We will be transparent, we will be held accountable for our actions,” he said.