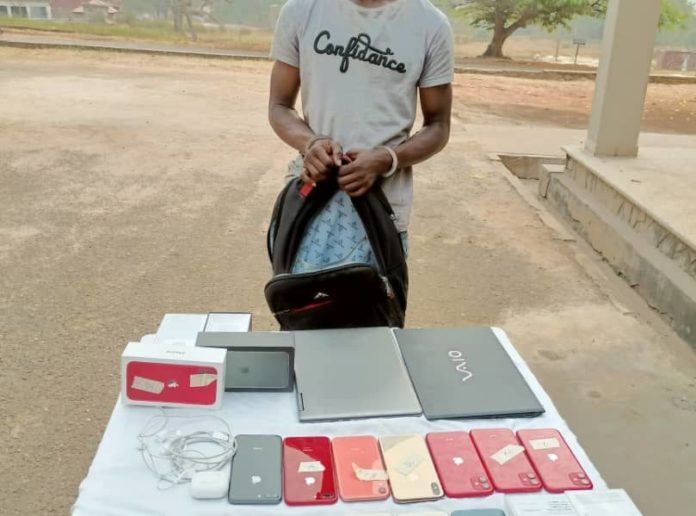 Nemesis has caught up with a 23-year-old suspected serial burglar, Tobi Awoola, in Ibadan, the Oyo State capital, for burglary and stealing of phones and accessories worth over N2million in Challenge area of the city.

Police operatives, attached to Felele Divisional Headquartres of Oyo State Command, apprehended him on Saturday January 22, 2022. He was said to have been living at a community on Oleyo Ayegun Road in Ibadan.

The Police Public Relations Officer (PPRO) for the command, Adewale Osifeso, a Superintendent of Police (SP), made this known to journalists in Ibadan on Tuesday via a press release, which he issued on behalf of the Commissioner of Police in the state, Mrs. Ngozi Onadeko.

According to him, the success recorded in the case was part of conscious effort to continue ridding the state off unscrupulous and sinister-minded elements, describing the suspect as an habitual burglar in connection with a case of burglary and stealing, which occurred at about 8p.m on Thursday December 28, 2021 at Choice Plaza, Challenge area Ibadan.

Osifeso continued: “However, as a result of painstaking and diligent investigations, through the swift deployment of intelligence and tactical assets, the suspect, one Awoola Tobi ‘m’ was tracked and apprehended in possession of the following items which were hitherto reported stolen. These recovered items include; 16 I-Phone mobile phones, a white earpiece, one unbranded white coloured earpod, a Sony Vio laptop, one Dell laptop and a black shuttle bag.

“Preliminary investigations and voluntary confessions made by the suspect revealed that he broke into the mobile phone and accessories shop situated at Choice Plaza, Challenge, Ibadan. This time unaided with the intent of stealing and re-selling the items.”

Osifeso stated that efforts have been emplaced to break into the suspect’s criminal network, adding that state police command “seeks the cooperation of the good people of the state in providing credible and timely information to help maintain the relative peace and tranquility enjoyed in the State.”