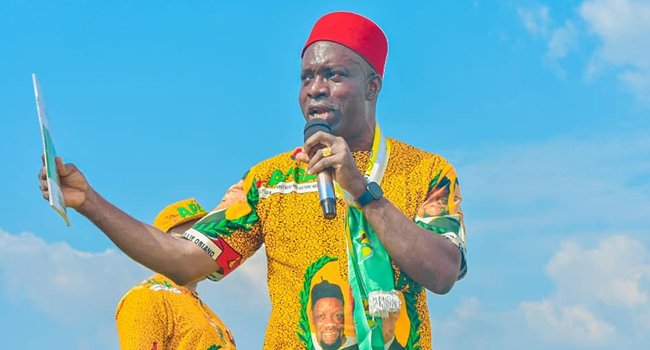 National Coordinator, All Progressives Grand Alliance Media Warriors Forum, Evang. Chinedu Obigwe has pleaded with  Anambra people  to support Governor Elect, Prof. Chukwuma  Soludo  to succeed in office  for the transformation of their  beloved State whom they  can be proud of when he gets sworn in on March 17.

In a statement issued in Awka yesterday titled “Love him or hate him, Soludo is a rare breed and a tolerant leader”, Obigwe restated his earlier position that disappointment awaits those that are wishing that Governor Obiano and  Soludo relationship would  be strained beyond redemption when the former hands over to the latter.

He said the reason why there won’t be any feud between the two was because Soludo is  the God ordained successor of Governor Obiano and  is determined to protect their relationship from being strained by agents of discord.

Obigwe also said nothing on earth is as sweet as having a man whose words are his bond in a sensitive position like the office of the Governor.

“When I talk about Soludo, am talking about a character that does not listen to gossip.  He is also a character that cannot be brainwashed, an open minded human being that will not shy away from telling you his mind.

He said another selling point of Soludo is that he is tolerant and has his mind focused on his set goals and revealed that uppermost thought on Soludo’s mind for now is how to justify the confidence reposed on him by the Anambra electorates.

“As his handover is fast approaching, Soludo has concluded arrangements to do something remarkable on 18th March 2022, a day after his handover.

He will be commencing work from Okpoko that is in Ogbaru LGA and Ogbaru is in Anambra north, a Senatorial district that will hand over power to him.

“When Soludo made a promise to start work from Okpoko after taking over from Governor Obiano, this calculation did not cross his mind but that is the reality on ground and it’s a good omen for the people of Anambra North.

“Soludo has plans to deliver dividends of good governance in all the nook and crannies of Anambra State. It is said that experience is the best teacher and I must confess that Soludo is well experienced and that his experience will be of a great help to ndi Anambra.  He will deploy his many years of experience in the governance of Anambra for the development of our beloved State”

“As at today, nobody knows what Soludo has in mind but many will not shy away from telling you that they are confident that he will do very well in office as Governor. He has the strong will to take tough decisions that will transform our State and we need to support the implementation of those tough decisions”

“During the electioneering campaign, I always refer to Soludo as the proverbial breadfruit whose time has come to fall. To God be the glory that my prophecy was fulfilled on November 6th 2021 with Soludo election as Governor Obiano’s successor”

“Let’s support Soludo genuinely in the morning, in the afternoon, in the night, in his front and at his back because doing that is for our own good and it’s also for the betterment of our beloved State.” He said.