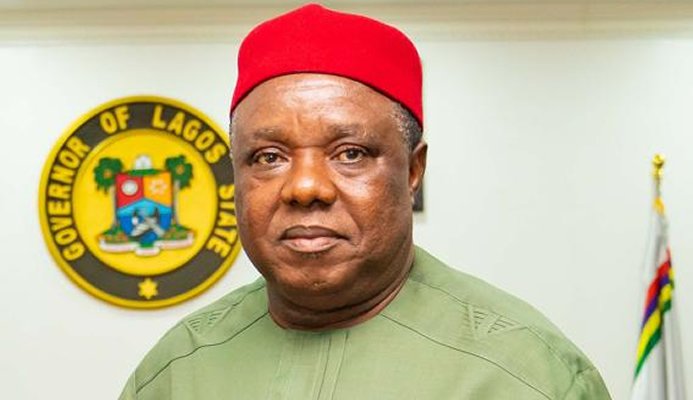 The Chairman of the Revenue Mobilisation Allocation and Fiscal Commission, Elias Mbam, on Wednesday, lambasted the 36 state governments and the 774 local government areas in the country for not thinking of new ways to generate revenue for the Federation.

He spoke as a guest on NTA ‘Good Morning Nigeria’ breakfast programme monitored by .

According to Mbam, governors and local government chairmen should stop agitating for new revenue allocation formula but focus on how to increase the “cake”.

Of recent, state governors and local government chairmen have clamoured for a review of the current revenue allocation formula which they claimed was against fiscal federalism as it allocated more to the central than to the subnationals.

Currently, the Federal Government gets a total of 52.68%, states get 26.72% while LGs get 20.60% of the country’s monthly allocation disbursed through the RMAFC which operates under the Presidency.

Speaking on the television programme on Wednesday, the RMAFC boss said landmass, population size and the duties of each of the three tiers of government are important factors to be considered in determining a new revenue allocation formula for the country.

Mbam said the last review was done in 1992 and a new review of the sharing formula has not been possible till date because of lack of political will and over-politicisation of the matter.

He, however, expressed optimism that a new revenue allocation formula would be submitted to the President, Major General Muhammadu Buhari (retd.), on or before December 31, 2021.

The RMAFC boss also said the Commission won’t wait for the outcome of the ongoing process for constitutional review and amendment in the National Assembly before going on to submit its recommendations to the President before the end of 2021 because, according to him, nobody knows when the lawmakers would be through with the process.

Mbam knocked state governors and local government chairmen for not thinking out of the box to increase revenue generation in their respective domains but always coming to Abuja cap in hand for their monthly cheques.

He said, “We are concerned more in increasing the size of the cake than dissipating our energy in sharing of the cake and the Commission has swung into action on this, it has carried out sensitisation in all the zones, in telling states and local governments to diversify, telling them what they can do, what is available in their areas to diversify because the ultimate way you can increase the revenue is to diversify from oil and gas and we have quite a lot of them (economic areas).

“There is no state or zone that doesn’t have one form of solid mineral or the other, why can’t we develop our solid mineral sector? Why has agriculture gone back?

“When we were small, local authorities collect bicycle licenses and things like that but now, the local governments have gone to sleep, they do not do anything, they just come here (Abuja) and collect the cheques, the states the same thing.

“We should encourage people who generate revenue…The Commission has intensified its activities in sensitisation, asking governments to diversify and right now, most of our officers are in the field, identifying what are available and what could be done so that it would yield more revenue.

“We also have to block the leakages in several areas. If it is blocked, we would have more revenue.”

The RMAFC chairman said no one should preempt or predetermine the new revenue allocation formula that would be submitted to the President on or before December 31, 2021.

He “appeal to Nigerians to participate actively in the process by letting us know their views and also know that it is a process, the aim of the review is not to give any due advantage to any (tier of government)”.

“If the process at the end says what is present is correct, then, we will go by it but the process cannot be predetermined,” he added.