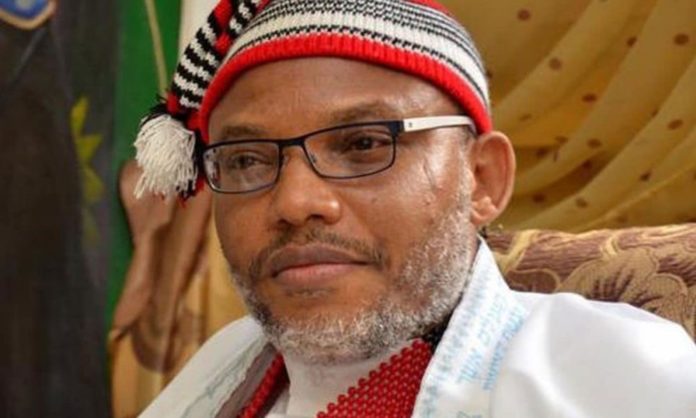 The human rights organisation said this while accusing the Department of State Services, DSS, of mismanaging the case of Kanu by, among other things, flagrantly denying him access to his lawyers, contrary to court orders.

HURIWA said that the heads of the DSS must at this point, de-escalate the tensions in the South-East by adhering strictly to the rules of engagement and respect decisions of the competent court.

The group said Buhari should release the IPOB leader without further delay and set up a proper mechanism for an all out negotiation and dialogue on ways to restore peace, security and stability to the South East, adding that it was dangerous for Kanu to remain in detention till April when presidential primary elections would commence.

HURIWA said posterity will not forget Buhari should he now act as a real statesman and a patriot by unconditionally granting pardon to all political detainees, including members and the leaders of IPOB and Yoruba Nation agitators now before the 2023 presidential primary elections.

HURIWA said this in a statement signed by its National Coordinator, Emmanuel Onwubiko and made available to DAILY POST, saying that the actions of the DSS against Kanu showed blatant disregard to the judiciary.

The IPOB leader’s lawyer Ifeanyi Ejiofor, had recently cried out that the DSS had four times in two weeks barred Kanu’s lawyers, led by Chief Mike Ozekhome from meeting him in custody.

Ejiofor said on Monday that all efforts by the lawyers to meet Kanu were resisted as the secret police “insisted that our request ran contrary to their procedure and guidelines.”

HURIWA cried out that the trial of the IPOB leader is highly politicised, adding that the Buhari government had grossly mismanaging the matter.

The group knocked the Attorney General of the Federation, Abubakar Malami (SAN), who according to it, had on many occasions rushed to the media to make allegations upon allegations against the secessionist leader.

“To state a matter of fact, the President has mismanaged Kanu’s case to an extent that it has stoked tension and caused violence in the South East,” the group said.