The Defence Headquarters (DHQ), said soldiers fighting the counter insurgency war in the north east have destroyed the operational base and stronghold of the Boko Haram and the Islamic States of West African Province(ISWAP), located in the heart of the Sambisa forest.

“The military High Command commends the ever conquering troops of Op HADIN KAI for this immense success. They are enjoined not to rest on their oars but use this as a springboard to finally defeat the insurgents and also keep up the fighting spirit.”. 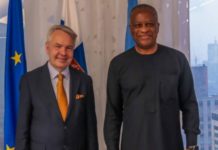