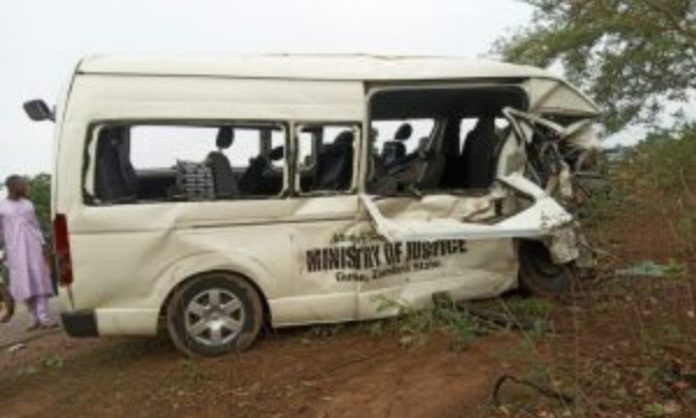 The Bauchi State Command of the Federal Road Safety Corps (FRSC), on Sunday, said that six persons lost their lives in a motor accident in Gumero village of Ganjuwa Local Government Area of the state.

Mr Yusuf Abdullahi, the Sector Commander, who confirmed the accident, said that ten others were seriously injured in the crash, involving a Toyota Hiace bus and a Peugeot 406 car.

Abdullahi said the accident occurred on Saturday around 4:05 pm.

According to the FRSC commander, the car with registration number KNT503JF collided with a bus belonging to the State’s Ministry of Justice, killing 6 of the passengers on the spot.

Abdullahi blamed the accident on overspeeding and wrongful overtaking.

He said the deceased included four males, one female and a male child, adding that six females, one male, a female child and two boys sustained injuries in the accident.

“The crash happened between a Peugeot car and a Toyota Hiace bus in Gumero village, some 15 kilometres from Kafin Madaki, headquarters of Ganjuwa Local Government Area of the state.

“Our men swiftly responded to the scene of the crash and they were able to rush both the survivors and the deceased to Kafin Madaki and Ningi General Hospitals respectively for confirmation and treatment, and also cleared up the crash scene,” Abdullahi was quoted by NAN as saying.

Abdullahi added that the injured and the corpses were referred to the Kafin Madaki and Ningi General Hospitals for confirmation and treatment.