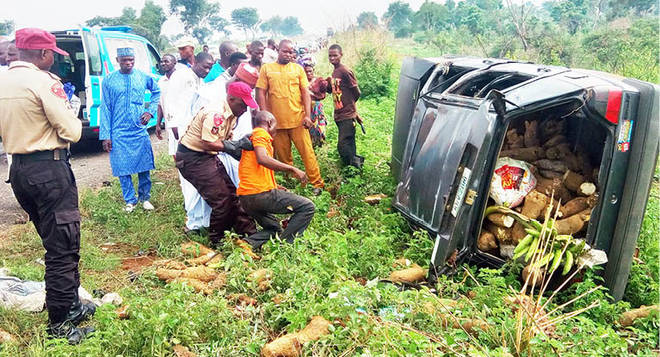 Seven passengers have been confirmed dead in a ghastly road accident that occured along Amasiri axis of the Afikpo-Okigwe Highway in Ebonyi State.

He said the accident which occurred Thursday evening involved a sienna bus and a truck laden with stones.

According to him, the vehicles had a head on collusion when the truck driver impatiently swerved to the lane of the sienna bus

He stated that the drivers of the two vehicles survived the accident while corpses of those who died had been deposited in mortuaries.

A source in the area said about two other victims of the auto crash, who were in critical condition, were rushed to the hospital.

The source said the accident occurred at Ndi-Uduma village, Oso Edda community, in the Afikpo South Local Government Area, of the state along the Afikpo-Okigwe highway.

The source further noted that in the collision occurred at a bend close to the Ihere Stream, in the area.

“It is true and as I speak with you now at least seven persons died on the spot, and about two persons are just being moved to the hospital.

“It is a very fatal accident. It involved a Sienna bus carrying passengers from Okigwe in Imo State and a MACK truck conveying chippings from the Afikpo North LGA side.

“The two vehicles collided on a bend at the Ihere Stream and six of the passengers died instantly. Three persons are being taken to the hospital now.”, the source said