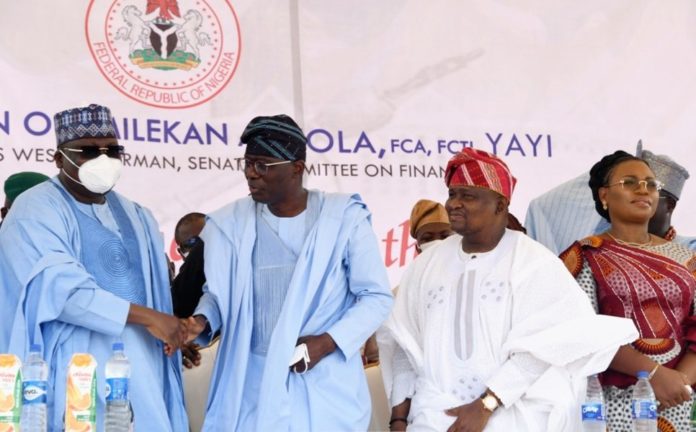 Speaking at the fifth edition of the Lagos West Senatorial District Town Hall meeting and Empowerment programme hosted by Senator Olamilekan Solomon in Lagos at the weekend, Lawan said one good term deserves another and Sanwo-Olu who was also present at the event, deserves another term because of his performance.

“I’m under this tremendous and massive temptation to say that one good term that you (Sanwo-Olu) are doing deserves another term. As an APC stakeholder, I hope I will be forgiven for this statement because that is what I believe in,” he said.

Speaking on the criticism following the National Assembly’s approval of more loans for the Federal Government, Lawan said the Muhammadu Buhari administration had to take loans because it inherited a badly managed economy from the Peoples Democratic Party (PDP)and there was insufficient funds for the development of infrastructure.

“PDP ruled Nigeria for about 16 years and all they did was to leave or bequeath so many challenges for us in 2015. We are dealing with those challenges one after the other and if on the way we encountered new challenges, we are equal to the task and we will turn around the fortunes of this country for better by the grace of God. We have done so much, but we are also challenged especially in the area of security.

“The APC options are limited but one option that is not on the table is not to do anything at all, or because you don’t have money you shouldn’t develop your country? The government at the national level is responsible and responsive. We wouldnt like like to take loans or borrow money, but when the options are limited and the necessity of development of infrastructure are begging, what do we do? If we have to borrow, we will borrow responsibly and target development,” he said.

Governor Sanwo-Olu in his response, thanked him, stating that the synergy between the executive and legislature in the state is to the common benefit of the residents of the state.

While speaking, Senator Adeola, said he decided to give back to his constituents because of the trust they reposed in him.

He said he has introduced 14 bills in the current 9th Assembly and three of the bills already passed into law.