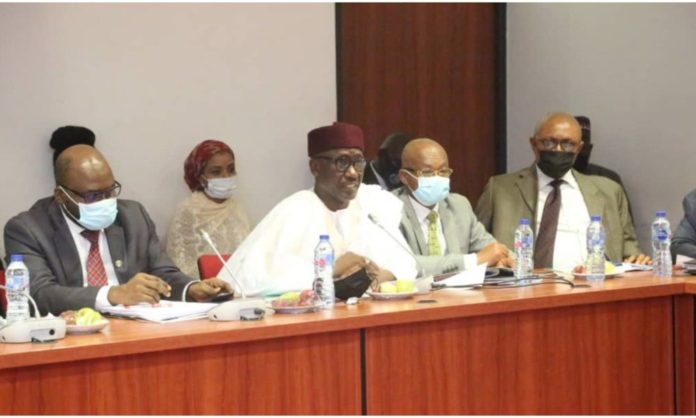 As the expiration of the National Anti-Corruption Strategy (NACS) approaches, the Centre for Fiscal Transparency and Integrity Watch (CFTIW) partnered with the Senate Committee on Anti-Corruption and Financial Crimes to review the implementation of the policy.

Kyari, in his remarks, listed the establishment of an anti-corruption desk, risk management charter, regulatory compliance and government charter, internal audit charter, and the corruption investigation manual, as achievements of the NACS implementation.

“Our transparency policy says we must disclose anybody we are doing businesses with, we are working with the Corporate Affairs Commission on this. We are required to have transparency in the commodity trading, this means the crude oil and the gas that we sell must be fully disclosed.

“Anyone here can simply go to the NNPC website. Every data that is required is in public space. NNPC, for 43 years, never published our audited accounts. But we did for 2018, we have published for 2019 and we are going to publish the 2020 audited financial statement.”

Kyari regretted how COVID-19 and the ENDSARS demonstration stalled the petroleum downstream deregulation. He said though the crash of oil prices due to the pandemic gave Nigeria an opportunity to remove subsidies, the protests forced the government to reconsider.

In his presentation, Prof. Owansanoye announced that the ICPC has been conducting corruption risk assessment of some MDAs.

He said the agency is focusing on the prevention of corruption. One of the strategies highlighted was the “system survey of the MDAs and corruption risk assessment”.

“We have noticed improvement because we published the reports on the newspapers, they are having impacts. We have done intensive review of 5 MDAs and 104 unity schools across the country.”

Sen. Kwari commended Owansanoye for ICPC efforts, and mandated all participants to use the commission’s template for the performance appraisal.

On Thursday, the Auditor General’s office, Nigeria Customs Services (NCS), Bureau of Public Procurement (BPP), Office of the Head of Civil Service (HOSF) and Corporate Affairs Commission (CAC) appeared before the committee. But the HOSF and the CAC were allowed to reschedule their appearance.

The NCS mentioned the establishment of the Nigeria Integrated Customs Systems. The platform grants stakeholders access to update the system from the comfort of their homes or offices.

The agency told the committee that an Anti-Corruption and Transparency Unit (ACTU) has also been set up at its headquarters, seaports and airports in line with the Financial Action Task Force (FATF) guidelines.

Aliyu Aliyu, BPP Head of Regulations and Database, said the agency had developed a database system and is streamlining the procurement process of the government.

About 328 government officials have been lectured on the use of Nigeria Open Contracting Portal (NOCPO). The BPP trained procurement officers in Federal University Owerri, Ahmadu Bello University Zaria and University of Lagos, among others.

The Auditor General, represented by the Director of Audit, Gandu Magaji, confirmed the staff have been sensitized on the NACS, forensic audit, and that an ACTU unit is operational. The TUGAR Chairman added that he ensures MDAs implement the strategy.

“My office has submitted audited reports up to 2019 to the National Assembly. For the 2020 account, the Accountant General has submitted the statement. In three months, we should be able to submit them.

“We have an annual audit of the recovered assets. We have not been able to do this, but the Auditor General is in the committee set up by the government to manage the sales of the assets.

“Despite the increase in anti-corruption activities to implement the NACS, there was no increase in funding to support the process. NACS did not make the desired impact due to lack of funding”, he said.

Sen. Kwari promised that the Senate will look into the funding, and directed all MDAs that made presentations to submit an evaluation of the NASC implementation to the secretariat of the committee on Friday.

The VP’s office, represented by Dr. Fatima Waziri-Azi, Senior Special Assistant on Rule of Law, called for the adoption of data in the report template of the MDAs. She stressed that data will help in measuring the impact of the strategy.

“We are happy that this forum was provided to enable us to assess the NASC and to know the level of the fight against corruption. To adequately review the implementation, the MDAs here, who have submitted their reports, should also be requested to provide specific data and figures.

“How many people were trained? How many meetings were done? We need data to measure the impact. We have seen that the funding and structure have not really worked well. That is something we should think about when reviewing NACS for the second time.”

In closing remarks, Sen. Kwari thanked the CFTIW and its Executive Director, Umar Yakubu, for the initiative, the technical support to drive the process, and for serving as a co-secretariat for the event.

“The Senate will work with the Centre in different areas. We will continue to assist Mr. President to fight corruption. We thank all those that attended the sessions. We will present the report to the Senate and make it public”, the lawmaker added.