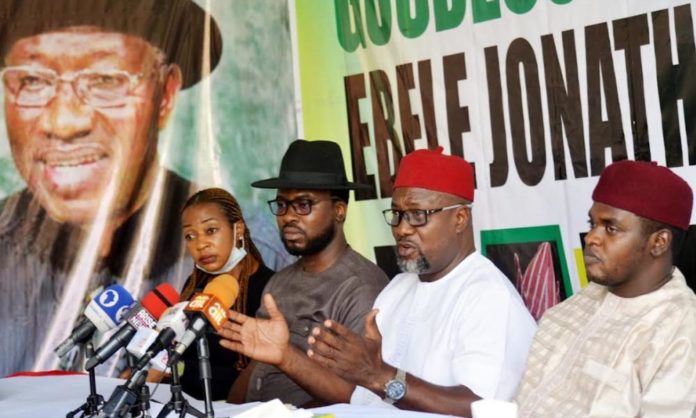 Push for former President Goodluck Johnathan to succeed President Muhammadu Buhari in 2023 gained momentum at the weekend as his supporters called on him to defect to the ruling All Progressives Congress (APC).

The supporters who are members of Citizens Network for Peace and Development (CNPD), said they want Jonathan to dump his party, the Peoples Democratic Party (PDP) and join forces with President Buhari in APC to return to power in 2023.

The group extended the invitation to the former President, calling on him to accept the offer to serve and rescue Nigeria at this crucial moment.

Hw said: “We call on former President Jonathan to once again avail himself to be of service to the country he loves so much! He should bear in mind the popular Latin saying: Vox populi, vox Dei( meaning, the voice of the people is the voice of God. This is a rescue mission you cannot refuse to lead sir.”

Buhari in 2015, defeated Jonathan and his Peoples Democratic Party (PDP); ending sixteen years of their reign in a massive electioneering campaign that pitched the former president’s era in power as not only fantastically corrupt but also clueless.

The supporters insisted that Jonathan remains the best candidate to take over from Buhari for the sake of continuity and his track records.

He said: “Looking closer home, Goodluck Jonathan’s track records as an achiever, nationalist and visionary leader are clearly evident around us. A good number of megaprojects initiated by his administration litter the horizon and though quite a number stand today in credit to the present administration in the spirit of continuity, the fact remains that he has left indelible footprints in the sands of time.”

They further noted that with the level of mutual ethnic mistrust in the country, what Nigeria needs is a time tested and trusted man like Jonathan to steer the ship.

He added: “Citizens Network for Peace and Development hereby lends its voice to the increasing calls by various groups on the need for former President Jonathan to run for office.

“We encourage Nigerians to come together in their numbers to support any initiative that will lead to the return of our much-respected former President to the Office of President of the Federal Republic of Nigeria!

“We also call on former President Jonathan to once again avail himself to be of service to the country he loves so much! He should bear in mind the popular Latin saying; Vox populi, vox Dei! The voice of the people is the voice of God! This is a rescue mission you cannot refuse to lead sir!

“We call on none other than our father and incumbent President Muhammadu Buhari GCFR, who has done so much in his few years in office to throw his support behind the candidature of Goodluck Jonathan, should he accept to vie for the office of President. Coming at the heels of the end of his tenure, we are confident that Jonathan more than any other candidate will ensure continuity, stability and fair play across the polity.

“We say to Mr President that you have sacrificed so much for this nation. Your Excellency’s greatest legacy yet will be in the fact that you left Nigeria in capable hands.

“For us, it does not matter which political party endorses Jonathan’s candidature. Our concern is for him to accept the call of millions of Nigerians to run for office is all that matters! We are ready to mobilise no less than 8 million Nigerians towards the 2023 polls. We say so with all sense of responsibility.”