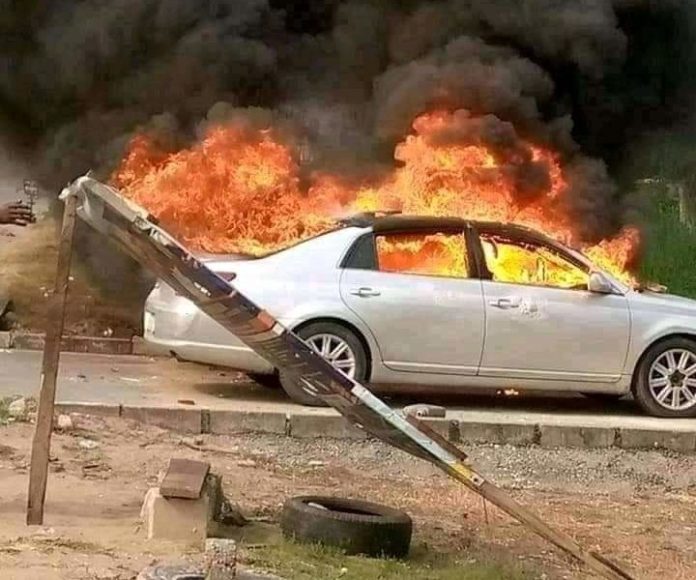 One car was burnt and many people sustained injuries, when supporters of factions of the Peoples Democratic Party (PDP) in Yenagoa Local Government Area clashed on Thursday in Yenagoa the state capital.

According to investigations the clash was between suspected supporters of the House of Assembly member representing Yenagoa constituency one, Hon Oforji Oboku and the Bayelsa State Commissioner for Health, Dr Pabara Newton Igwele.

Oboku from Epie clan in Yenagoa and Igwele from Atissa are rumoured to be eyeing the House of Representatives ticket for Yenagoa/ Kolokuma/ Opokuma Federal constituency.

Eye-witness accounts stated that trouble started when the suspected Igwele supporters were seen on a subtle solidarity dance around Kpansia market and suspected Oforji supporters infuriated by the audacity to sing praises of Igwele launched an attack with various dangerous weapons.

Many of the suspected Igwele supporters were injured while other innocent people that came to the market were caught in the ensuing skirmish.

An aide to Governor Douye Diri, Hon Ada Morris believed to be on the side of Igwele had his car set ablaze opposite the Kpansia market.

The timely arrival of a detachment of Police to the scene was able to restore order as those involved in the clash fled the scene.

Sources said the Commissioner of Police has summoned Oforji and Igwele to the State Police Command for an emergency meeting over the clash.

Police sources said after the meeting the Commissioner of Police is likely to present a report to Governor Diri.

As of the time of filing this report, the burnt vehicle was seen being towed to the State Police headquarters.

Contacted on the development, the spokesman of the Bayelsa Police Command, SP Asinim Butswat, confirmed that two suspected groups of thugs clashed but that the police are investigating the motive behind such an act.

Oforji and Igwele did not pick their calls as they were still in the meeting with the Commissioner of Police.

Calls placed to the state Secretary of PDP, Mr Gesiye Isowo were not picked.