The National Association of Nigerian Students (NANS) South West Zone D, on Monday, stormed the National Secretariat of All Progressives Congress (APC), Abuja, to protest the alleged petition and call by a group for disqualification of Ogun state Governor, Dapo Abiodun, from running for the second term in office.

The Students who were jointly led by the NANS South West Coordinator, Comrade Adegboye Olatunji, and Chairman of NANS Ogun Joint Campus Committee (JCC), Comrade Kehinde Damilola Simeon, passed a vote of confidence on Abiodun and asked APC leadership to clear him to contest for re-election as Ogun State Governor.

The protesters wielded placards of various inscriptions such as “NANS South West Zone D pass vote of confidence on Abiodun”, “We can’t afford to lose a good man cheaply”, “Dapo Abiodun has prioritised our education”, and “Dapo Abiodun is the best man for the job” among others.

Olatunji told newsmen that the students were led by their leaders to APC Secretariat in Abuja, to present their position to the leadership of APC and to dissociate themselves from the recently sponsored and ill-motivated protest against the governor calling for his prosecution and disqualification from contesting for a second term in office as the Governor of Ogun State.

“We call on the leadership of APC to discountenance their frivolous petition and trash it because, to us as student leaders of South West, they are an illegitimate group.

“Governor Abiodun remains one of the best products of APC as his education policy is enviable in the South West region,” the students said.

The students also vowed that they would not relent in the ongoing nationwide protest against the prolonged strike by the Academic Staff Union of Universities (ASUU), noting that the next phase of the protest would target the shutdown of airports and other sources of the Federal Government revenue until the strike is called off.

They also called on the Federal Government, particularly the Economic and Financial Crimes Commission (EFCC), to ensure diligent prosecution of the arrested Accountant General of the Federation (AGF), Mr Ahmed Idris. 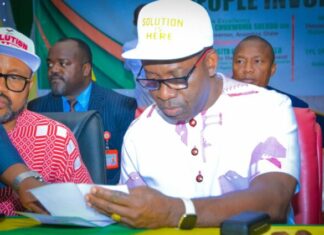