The governorship aspirant of the National Rescue Movement (NRM) in Rivers State, Sobomabo Jackreece, has declared his affirmation of the outstanding performance of the administration of the state’s former governor, Chibuike Amaechi.

Jackreece disclosed this yesterday, when he addressed party stakeholders and supporters during his formal declaration to contest for the governorship position of the state in 2023.

‘Ladies and gentlemen, you and I know what is happening in Rivers State. It’s like we have gone back to the 18th century. We are not moving forward, we are moving backwards,’ he said.

‘We followed different political parties believing that they are going to transform our state. But, I will tell you, even if I am not a pro-Rotimi Amaechi man; when you look at when Rotimi Amaechi, our former governor was leaving, can you compare that time with now?

“Even though he stole with the monorail project, but lets look at it well. Will you compare Rotimi Amaechi’s tenure with what is happening now? Do you know why? The administration was all-encompasing.

‘You don’t need to call one man in the Brick House (Rivers State Government House) to give you contract. You only need to identify your commissioner and if there are available contracts, you will get.”

Ude said: ‘The kind of popularity exhibited by Jackreece in Abuja was so alarming. I want to appreciate Rivers people for standing by this man. On behalf of the national leadership of NRM, we love him so much.

‘I want to let him know that he has no competitor of bearing the flag of our great party. He has paid his dues and we want to pay him back.

‘The only thing I want us to know, there is a revolution we want in Rivers State, ballot box revolution with your PVC. It was demonstrated in Anambra State and it worked. Even with their money, the lost to Soludo. If your love Rivers State, go and get your PVC.’ 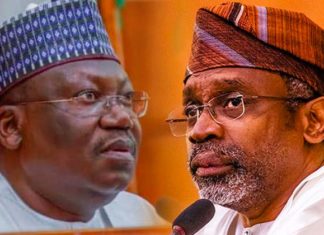