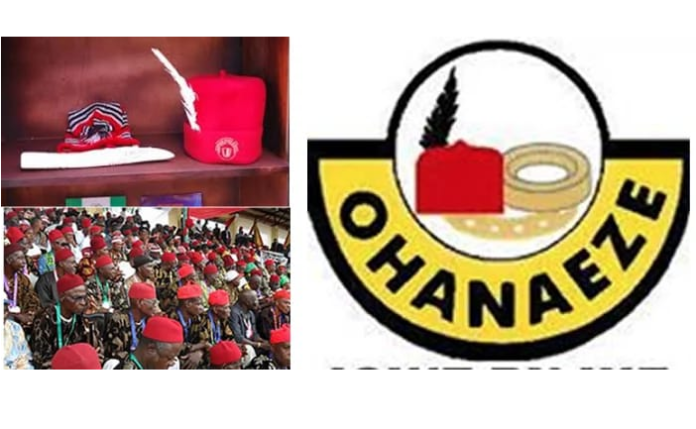 Igbo elders, intellectuals, Ohanaeze Ndigbo and many other groups have warned against the grand plot to deny the Igbo of South East Nigeria the opportunity to produce the President of the country next year.

Several commentators insist that it is the turn of the South East, urging that anything to the contrary was enough to threaten the unity of Nigeria. None of the major political parties has zoned its presidential ticket.

Igbo Elders Consultative Forum (IECF), was the first to raise the alarm that major political parties were about zoning their presidential position elsewhere other than the South East.

The group also said they have discovered that some Igbo sons and daughters are being used to fine-tune the plot, with a promise of being chosen as running mate to whoever emerges the presidential candidate in any of the major political parties.

Chairman of the forum, Dr Chukwuemeka Ezeife, who stated this at a press conference in Abuja, was emphatic that the position of the zone was not for any other position from any of the political parties, except the presidential ticket.

Ezeife warned that the zone would not support any party that failed to field candidate from the South East.

“We are waiting for them, as they will meet their political waterloo this time if they insist on short-changing the South East this rare opportunity of producing a credible, patriotic, detribalised and dynamic president of Nigeria in 2023,” he said.

Ezeife assured that measures have been put in place to identify the people working against the political interest of South East people, saying they would incur the wrath of the people.

He stated: “We are very serious about this directive, and do not mean those unserious bootlickers who are angling to be running mates to candidates from other parts of the country, as the Igbo will not take it lightly with any of our sons or daughters who accept to be running mates to any person outside the South East zone in 2023.

Ezeife said Nigeria would be the biggest beneficiary of a President of South East extraction as according to him, her unity will be better guaranteed because of justice, equity and fairness.

The elders’ position came as the apex Igbo socio-cultural organization, Ohanaeze Ndigbo declared that whichever part of the country that produces the next president would send a conspicuous message to all Ndigbo worldwide about their destiny in Nigeria.

“I understand clearly the dilemma faced by these leaders but Nigerian politics is at a point of no return where national destiny is at stake and where patriotism and political wisdom must supersede personal ambition,” Obiozor said.

He, therefore, pleaded with the nation’s political class to drop all fears and prejudices against Ndigbo and to forge a common front to move the nation forward.

Obiozor also noted that Ndigbo, as an ethnic nationality, is blessed with a good number of capable, patriotic and credible personalities who are eminently qualified to govern the country and meet the expectations of the citizenry through equity, justice and fairness.

However, National Publicity Secretary of the apex Igbo socio-cultural body, Chief Alex Ogbonnia commended prominent sons of the region that have thrown their hats in the ring. They include former President of the Senate, Chief Anyim Pius Anyim, Senate Whip, Dr. Orji Uzor Kalu, Ebonyi Governor; Chief David Umahi and Sam Ohuabunwa, among others.

Also, President of Alaigbo Development Foundation (ADF), Prof Uzodinma Nwala, has described those against the next president of Nigeria coming from the South East as enemies of democracy.

Nwala said: “We are calling on our people to stand firm on their demand that the next President of Nigeria must come from the South East.”

For celebrated scholar and founding National Secretary of Alliance for Democracy (AD), Prof. Udenta Udenta, he was particularly surprised that men in the calibre of the All Progressives Congress (APC) National Leader, Bola Tinubu and the former Vice President, Alhaji Atiku Abubakar, could be campaigning for president when both are very much aware that their zones had for several years at one time or the other interchanged as President or Vice President respectively.

Udenta in an interview, argued that the South East in 1999 was clearly denied the Presidency just to favour the South West because of the sentiment of the annulment of the June 12, 1993 election.

“For me, there is no way that Obasanjo’s eight years of Presidency, Osinbanjo’s eight years of Vice Presidency should not translate into a clear, visible, unambiguous statement for power to shift to that part of the South that has not experienced this Presidential power after all the sacrifices of Dr Ogbonnaya Onu, Dr Ezeife and Alex Ekwueme and the rest of them.

“Let me explain few myths to further buttress my bearing. Falae and late Uncle Bola Ige squared off at the Royal Hotel in Ibadan and Falae won and became the AD candidate, the same way Obasanjo defeated Ekwueme and emerged as PDP candidate. The Rovan selection was a South-West selection of the AD.

“However, Dr. Chukwuemeka Ezeife who is alive today, purchased the N1million form of the Alliance for Democracy to participate in that process and won a strong vote of the South-East and South-South of the country, but the expanded meeting of the AD leadership, the National Working Committee (NWC), National Executive Committee (NEC), the caucus of the party, the Board of Trustees, the owners of the party met at the Cultural Centre opposite UTC, Abuja,  to decide between Falae and Ezeife who would be candidate of the party. Our leader who was my father, Arthur Nwankwo actually misfired that day; he knows from his grave that I am not lying, and the South-East and South-South went up in anger, led by Bassey Ekpo Bassey. We had entire North, South-East and South-South with us, Ezeife had beaten Olu Falae right there in that hall, but after three, four, five hours of robust conversation, they asked Ezeife to step down and he graciously did so and raised the hands of Olu Falae. That was how Falae became the candidate of the party.

“Therefore, the Southwest of this country should know that they stand morally disqualified to run for the office of the President until the South-East has taken their turn, and whoever is in the South-West called by whichever name presenting himself for 2023 Presidential seat, for me, is rapacious in his appetite and insufferably greedy to seek for the office.”