Forum of statutory delegates across the country have appealed to President Mohammadu Buhari to support the presidential bid of the former Rivers State Governor, Rotimi Ameachi to emerge the APC presidential flag bearer.

The forum national leader, Hon Dr Kassim Muhammad, a former member of Nasarawa State house of Assembly in a statement after an emergency meeting said Ameachi remain the most popular and acceptable candidate that can defeat the former vice president, Atiku Abubakar of the PDP.

“No presidential aspirant in the party has such diverse experience, credentials and, his footprints in all the positions he has held stand him out among his opponents”

Daily Sun reports that President Mohammadu Buhari had recently met with all the APC governor’s where he pleaded with them to allow him choose his successor.

According to the forum “Ameachi has both the legislative and executive experience, he has traverse the nooks and crannies of the country and have seen the challenges face by Nigerians and is ready to address them once he is elected”

The forum appeal to President Buhari to present Rotimi Ameachi to APC governor’s as his prefer choice, adding that only Ameachi is qualified to take over from Buhari to consolidate on his achievements.

The forum promise to work assiduously to deliver Ameachi in all the 36 states and the FCT for the party to retain power at the presidency.

The forum equally regretted the unfortunate electoral act that exclude them from participating in the primaries, else they were ready to put their votes in blocked across the country for Ameachi to proof to the president that Ameachi is loved by the people.

“As a mark of respect, the Statutory delegates were ready to vote massively for Ameachi without collecting any penny from him to show that Ameachi indeed deserves Nigerian supports at this material time but the unfortunate situation brought us where we are”

“We are hoping that, given the presidential ticket, we shall all go out to mobilize support and ensure he wins landslide during the elections” they said. 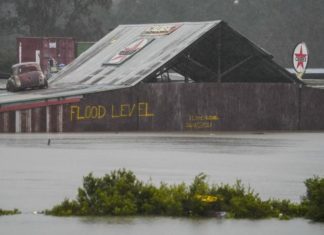 3 feet of rain sets up 4th round of flood misery...