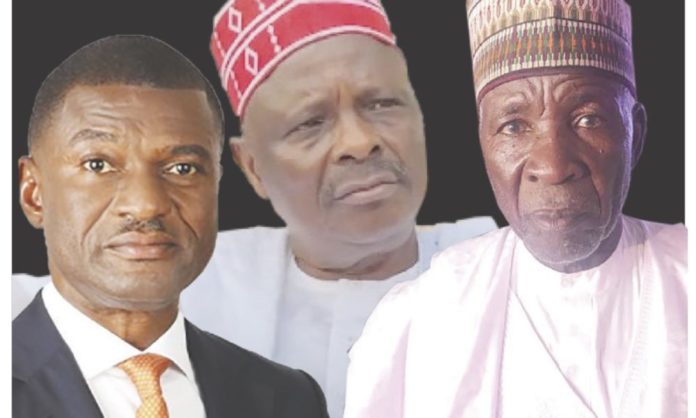 There are strong indications that next year’s general election is going to be one of the most heated exercise in recent times. This much is revealed following the formation of different pressure groups, alignments and realignments.

Also, this will put to test the political stamina of the ruling All Progressives Congress (APC) to retain power beyond the administration of President Muhammadu Buhari, the doggedness of the People’s Democratic Party (PDP) to take over the mantle of leadership, as well as smaller parties making inroads.

To this end, political heavyweights began the year by forming plethora of pressure groups with different philosophies, ideas and ideologies ahead of 2023.

The first was the Rescue Nigeria Project (RNP). The launch had the presence of a former governor of Kwara State, Abdulfatah Ahmed; former Minister of Information, Frank Nweke Jnr; former Director General of National Orientation Agency (NOA), among others.

Former Governor Ahmed disclosed that the unveiling of the group was necessitated because of the abysmal state of the nation.

He stressed that the current system was a reflection of ethno-religious interest and geographical sentiments.

“If you look at the current situation we are in now, you will see that Nigeria requires to be moved better than where we are today. We need to drive it with a sense of urgency if we want to effect new things and get things done differently.

“If you look at the current political situation and landscape, the selection process is likely hinged on geographical interest or ethno-religious interest,” he said.

Asked why he did not effect the change while in government, he said: “In politics, you want to continuously see things change for the better because of the people.

“Because no matter what you have done in the past, if you see new ways of doing things to get you new results you will naturally run to hold on to that because you cannot continue to do the same old things and expect to get a better result.”

While corroborating Ahmed’s assertion, Frank Nweke, decried the spate of killings, poverty and unemployment that have engulfed different parts of the country, and called on Nigerians to join RNP, to change the narrative.

Nweke said: “I believe that there is absolutely no doubt that our country is in a very bad place at this time; challenges of insecurity, high unemployment, inflation, banditry and terrorism and even our foreign policy all over the world is at the lowest ebb from the time when we intervened in other countries to restore law and order and democracy.

“Nigeria democracy is severely challenged. Twenty years post return to democracy, our country is in the worst crisis ever since independence.

“So, there is actually no contention whatsoever. Now, on the matter of RNP, I believe that any well-meaning citizen who agrees that our country is in a bad place should quit lamenting and try to do whatever they can do.

“All hands must be on deck all over the country because there is hardly any save haven in any part of this country today.

“I believe that one thing that is critical of RNP is to create the kind of awareness for each reason you’re here, massive mobilisation which will translate to involvement in the political process.

“In the last elections, out of 82.5 million registered voters, only 35 per cent of that number came out to vote for the current president.

“It has happened at various times in our country and I believe it is possible to do so again.”

Meanwhile, RNP National Coordinator, Usman Magaji, explained that before the year ends, the group would dissect the murky waters of politics, before adopting a formidable political party.

Magaji said: “RNP is not an NGO or pressure group, RNP is going to adopt a political party among the existing registered political parties.

“We are going to create that alternative political platform which will provide an opportunity for the most competent, more credible candidates who have genuine passion to fix this broken country and its many broken societies.”

In the same vein, former Governor of Kano State, Rabiu Kwankwaso, within the week, birthed what he called The National Movement (TNM).

Kwankwaso assured Nigerians that Boko Haram insurgents and kidnappers would be decisively dealt with by equipping and empowering security agencies and providing effective and unquestioned capacity.

He did not, however, disclose if the group would join forces with either the PDP or APC, but said: “We are aware of the urgent need for us to come together to form a formidable national movement to save Nigeria from further drift and threats of disintegration; determined to work together with like minds and fellow compatriots to protect and defend the sovereignty and territorial integrity of our fatherland; deeply committed to rescuing our country and our people from fear, despondency, hunger, misery and deprivation; and desirous of rebuilding our nation in the basis of the principles of social justice, equity, equality and fairness.”

He charged the Independent National Electoral Commission (INEC) and other electoral bodies to ensure free, fair and credible plebiscite, and encouraged Nigerians to elect competent leaders.

“Our country is again facing another impending round of national elections. TNM is earnestly calling upon our electoral bodies to tread the path of honour and integrity to ensure free, fair and credible elections.

“Our electorate should equally shoulder the responsibility to fully discharge their civic responsibility and select leaders of character and real integrity.

“We also look up to our development partners to join hands with us to ensure free, fair and credible election.

Realising the citizens have been poorly treated, a former Minister of Sports and Youth Development, Solomon Dalong, apologised to Nigerians.

Dalong stated that when he was in the trenches vouching and campaigning for the All Progressives Congress (APC), he never promised the electorate that they would experience the kind of socio-economic problems they are experiencing.

“We must begin by apologising to Nigerians. We must sincerely apologise that we never promised Nigerians that by this time they will be buying rice at N35,000 per bag.

“As a Christian, when I was campaigning in Katsina, Zamfara and Sokoto states, where the people were donating money and even fueling my car, I never promised them that bandits were going to take over their land.

“I must apologise. We never promised Nigerians that they were going to find themselves so divided as they are.

“It is our inability to live with the reality of our promise that as a Christian who has conscience that I have to apologise to Nigerians. Because after this world I will appear before God on judgment day,” he said.