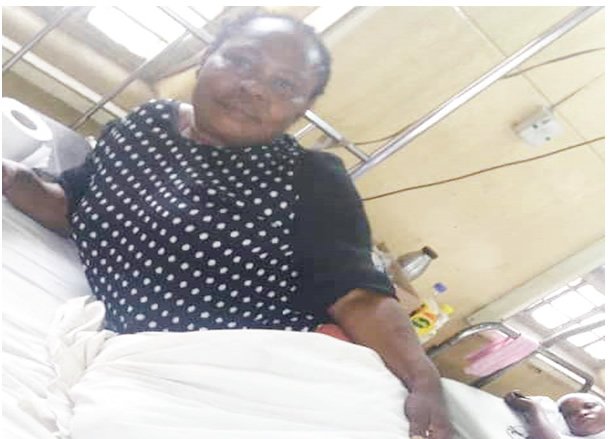 A trader, Esther Eyo, has demanded justice after suffering multiple fractures in her ankle when men of the Lagos State Police Command allegedly brutalised her at her shop in Oyingbo Market, Ebute Meta.

gathered that Eyo and her elder sister’s son, Wasiu Isiaka, were attending to customers when the policemen, who were in mufti, suddenly attempted to whisk her nephew away.

Eyo was said to have demanded explanation for the arrest when one of the policemen allegedly pounced on her.

According to the single mother of three, the policeman kicked her and she lost balance, fell on her left leg and broke her ankle.

The 47-year-old said, “I held Wasiu’s hand and told the men that we both sold vegetable in the market and that he did nothing wrong. But one of the men kicked Wasiu and also used his boot to kick and march my left leg till I fell on the main road. My leg twisted, my eyes got torn and I became unconscious.

“When I regained consciousness, I was told that the men came in a Sienna vehicle and two policemen were in the car. The men were about seven, but only four of them dragged Wasiu and took him away. I called a church member, Mr Bayo Opoola, and told him policemen broke my leg as I could no longer work.

“I told him the same policemen arrested Wasiu. So, when he came, people in the market told us to go to the Denton Police Station. When we got there, we saw Wasiu and Mr Opoola engaging the Divisional Police Officer over what his men did to me. Wasiu was released around 8pm after his arrest around 7am.”

The Cross River State indigene said she was taken to the Lagos Island General Hospital, where she was told that she suffered fractures in her left ankle, adding that she was placed on admission.

She said, “The doctor said the impact of the attack also made my blood pressure rise and that they needed to treat that first before attending to my leg. I have never had BP in my life. After treating my BP for a week, an X-ray was done on my leg and I was told I will undergo surgery.

“We have spent over N300,000 on my treatment and the police that caused this abandoned me. I want justice; my children and I have been helpless. A lot is needed for my treatment and I don’t even have the money. I want the policemen to be dealt with appropriately.”

Opoola said Eyo had been in pain since the attack by the policemen.

He said, “When I got there, she told me what happened and I told her to stand up but she couldn’t, as she suffered multiple fractures in her ankle. I was annoyed as to why the police brutalised her in such a manner over the arrest of her nephew who no crime was established against.

“The woman was crying as she was in pain and her leg was swollen. I hired a tricycle and went with the woman to the station. We saw the boy at the counter, but the DPO was very unfriendly to us despite showing him what his men did to the woman.

“One AY was among those that attacked her. Since then, I have been taking this woman to the hospital.”

The state Police Public Relations Officer, CSP Adekunle Ajisebutu, said he would get back to our correspondent after being briefed.

He had yet to do so as of the time of filing this report. 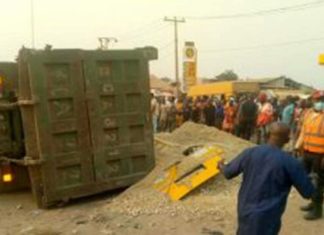