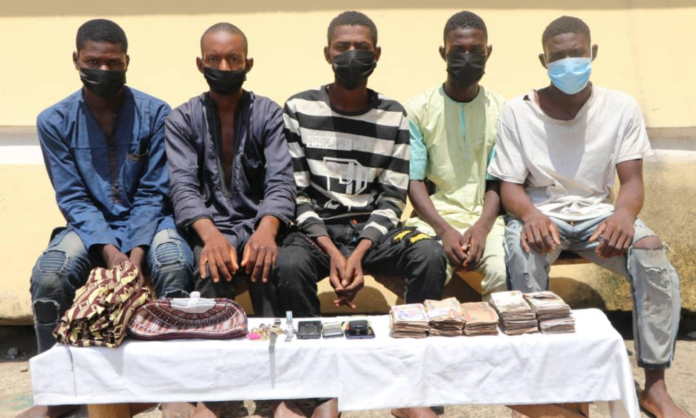 The suspects Usman Musa 20, Bello Musa 21, Haruna Alhassan 22, Lawal Abdullahi 25 and Abdul Alhassan, were arrested by  Operatives from the Anti-Kidnapping Squad during an intelligence-led operation.

FCT command Police Public Relations Officer, Yusuf Mariam, said the suspects were found to be in possession of  N1,275,000), paid as ransom by their victims, three mobile phones, charms, three wrist watches and two caps at the time of their arrest.

Yusuf in a statement said “The FCT Police Command has arrested five (5) suspects for kidnapping along Tungan-maje, Bwari and Kwali-Kuje axis

“Amongst the suspects are: one *Usman Musa 20years, Bello Musa 21years and Haruna Alhassan 22years all male* , arrested by Police Operatives from the Command’s Anti-Kidnapping Squad during an intelligence-led operation. The suspects who belong to a notorious syndicate of kidnappers confessed their involvements in the recent abductions along Bwari-Byzahin, Kuje-Kwali axis and Niger State. Exhibits recovered from them are: cash sum of one million, two hundred and seventy-five thousand naira (N1,275,000) paid as ransom by their victims, three (3) mobile phones, charms, three (3) wrist watches and two caps.

“Relatedly, one Lawal Abdullahi 25years and Abdul Alhassan 19years both male, were arrested for being linked to the kidnappings along Tunga-maje axis. The duo also confessed to threatening some residents of Tunga-Maje to pay ‘ransom’ to avoid being kidnapped. Exhibits recovered are:  one (1) mobile phone.

“All the suspects will be arraigned in court upon conclusion of investigation.