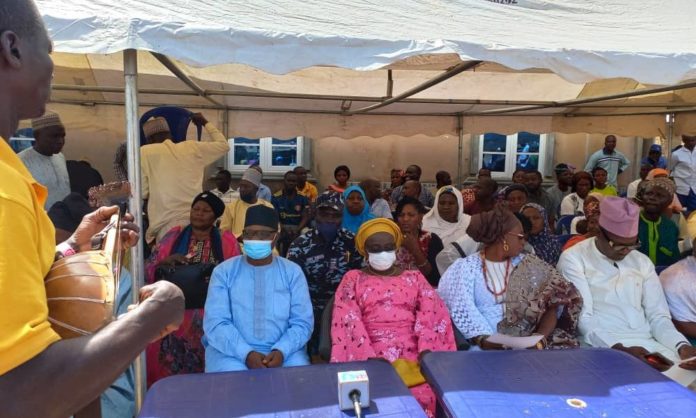 Senator representing Plateau South in the National Assembly, Prof. Nora Ladi Dadu’ut has distributed empowerment items worth millions of Naira to over 600 persons in her Constituency.

The items distributed includes several power tillers, motorcycles, tricycles, sewing machines, grinding machines, Knapsack and water pumps for dry season farming with a view to improve the economy based of the people.

Sen. Dadu’ut who distributed the items on Saturday in Shendam Local Government Area of Plateau State said the gesture is her own way of showing appreciation to her constituents for finding her worthy to represent them at the senate.

She explained that since her election one year ago to filled the vacuum created by the death of her predecessor, she has so

far empowered over 8, 000 constituents who are becoming economically self reliance.

“As you are aware in my manifesto, i pledge to focus on the priority areas of agriculture, education, women and youths empowerment, health, human capital development as parts of my commitment to deliver on the dividends of democracy to the good people of my constituency.

Dadu’ut called on all her constituents and the people of the state to support Simon Lalong administration to uplift the standard of living in the state and said she has enjoyed tremendous support from the people which and has inspired her to do more for them.

Prof Daduut appreciated President Muhammadu Buhari for putting in place friendly economic policies, stressing that her primary responsibility and desire was to add value to the livelihoods of the people and communities of Plateau Southern Senatorial district.

She added that her constituency projects are important because they would make the constituents experience the dividends of democracy.

Sen. Dadu’ut called on the people to stay peacefully with one another and build a prosperous Plateau South Senatorial district.

Mrs. Lalong who was represented by Rebecca Sambo, Commissioner of women affairs in the state, pledged to support the Senator in order for her to continue to provide dividends of democracy to the people.

One of the beneficiaries, Mr. Yilkur Hitler Dadi, thanked the Senator for the training and the laptops and assured her of judicious use of the items given to them.