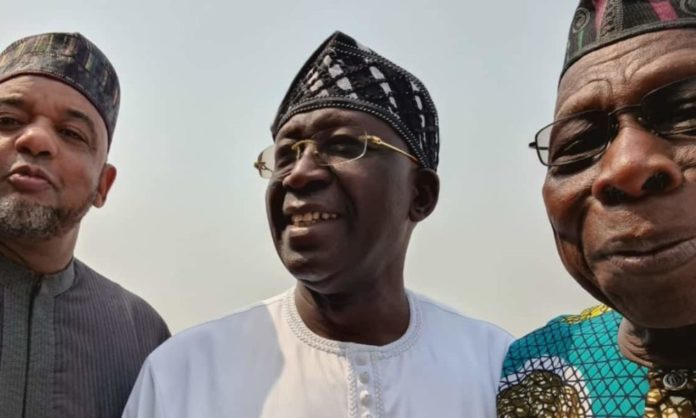 The National Chairman of the Peoples Democratic Party (PDP), Iyorchia Ayu, has said that the leadership of the party would work to restore what he described as the “lost glory” of Nigeria.

He added that the party under his watch would equally traverse every ward and local government in the country to ensure the party regains its number position in Nigeria.

Ayu made the remarks on Saturday when he led the party’s National Working Committee (NWC) to the Abeokuta residence of former President Olusegun Obasanjo.

The Deputy National Chairman of PDP (South), Taofeek Arapaja and other party officials were also part of the entourage.

Ayu said that since his emergence, he and his executive members have been working to bring back the era of Obasanjo’s administration which according to him was a shining example in Africa.

He explained that the party leadership decided to visit the former president to thank him for the great service as the first president on the platform of PDP between 1999 and 2003.

“As soon as I emerged as the chairman of the party, it was inevitable that I have to come here.

Sir, we thank you for the service you rendered and the great work you have done in the PDP as the first president. Your period as president under the platform of PDP is seen as the golden era of the PDP because not only did you grow the economy to be the biggest economy in Africa, you were able to save Nigeria from slavery by negotiating and cancelling so much of our foreign debts that would have made it very difficult to run the country.

“By the time you left office, Nigeria was totally set free; direct foreign investment was on the increase on a daily basis and we were respected in the international community. Today, unfortunately, we don’t have the same recognition because what we have is fall short of the leadership that Nigeria deserves.

“It is our prayer that you will continue to try and support us. In Africa today, in all modesty, after the departure of President Mandela, there is only one person of such stature on the African continent and we are proud that that person is a Nigerian and that Nigerian is no other than former President Olusegun Obasanjo, and you have continued to display the leadership.

“Even though you have retired from partisan politics, partisan politics will never retire from your blood, because you want the right thing done and since you want the right thing done, for the life you will remain the emeritus member of the PDP. You cannot build a house and leave it to collapse. So, I want to plead with you, don’t be tired of us as we come knocking asking for your advice, asking for wisdom because the words of elders are words of wisdom.

“And there is no leader here in this country than President Olusegun Obasanjo. we appreciate you and we promise that we will do everything to rebuild this country”, Ayu stated.

Speaking earlier, Obasanjo reiterated that he was done with partisan politics.

He informed Ayu that with his position, he has a lot of load on his shoulder, saying “I pray God should help you with this task of rebuilding and repositioning the party”.