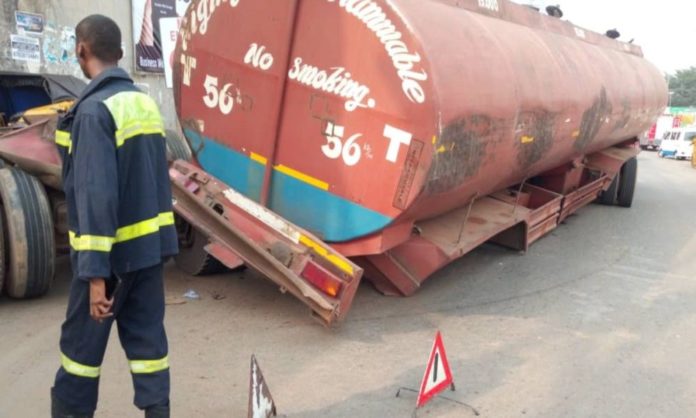 There was panic at Aroma junction in Awka, Anambra State, on Sunday after a tanker-laden truck lost its two rear tires and ran into the wall of the flyover.

The accident prompted traders and residents to flee the area.

DAILY POST gathered that the accident happened while the tanker was on its way from Enugu.
The panic may not be unconnected to the recent explosion of a tanker, which was discharging fuel in a petrol station, which caused a huge commotion, and later led to the burning down of the fuel station.

Meanwhile, firefighters in Anambra have assured that there is no cause for alarm. The fire chief in Anambra said his men have been mobilized to the scene, just in case of an explosion, but further assured that the tanker has been found not to be loaded with petroleum product.

A statement by the Anambra State Fire Service boss, Chief Engr Martin Agbili said: “Please stop the panic, there is no cause for alarm at Aroma, Awka. the tanker is empty of any petroleum product.”

He further stated: “At about 0825hrs (08:25 am) of today Sunday 16-01-2022, Anambra State Fire Service, Awka, Nigeria received a distress call from our distinguished Hon Commissioner for Information, C Don Adinuba of a fallen petrol tanker at Aroma, Awka.

“The incident was caused due to the falling off of the back tyres of the tanker which immediately hit a moving Keke Napep (tricycle). There was no loss of life but the driver of the tricycle who sustained injuries was rushed to a nearby hospital.

“Other relevant authorities had been notified to do the needful about the tanker removal and the road safety for passersby and other motorists.

“Please let us not panic so much because it is an empty tanker (without any product). fire kills, but you can prevent it.” 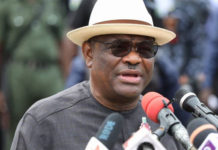 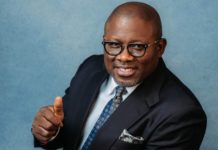