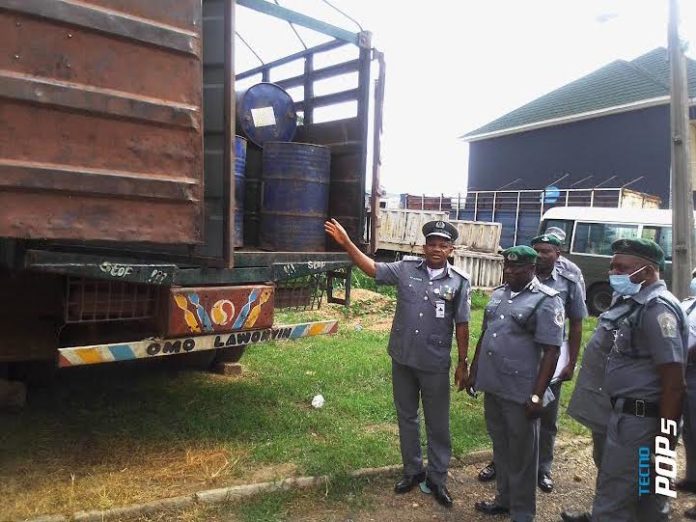 The Nigeria Customs Service (NCS), Oyo/Osun Command, has intercepted almost two truckloads of Premium Motor Spirit (PMS), with a Duty Paid Value (DPV) of N5,079,800 being smuggled to another country.

The Customs Area Controller, Comptroller Babajide Jaiyeoba, who briefed journalists on the command’s achievements within the past few weeks, at the headquarters of the command in Ibadan on Thursday, said the commodity was intercepted in some communities on Oke-Ogun axis of Oyo State, where Nigeria shares borders with a neighbouring country.

The petrol, according to him, was concealed in 210 drums of 200 litres each, and 629 kegs of 25 litres each, totalling 57,725 litres. He added that 141 drums of the commodity, totaling 28,200 litres, were intercepted in one fell swoop. The commodity, he said, would be auctioned in accordance with relevant laws.

The command, he said, also made seizures of 2,198 bags of rice of 50 kilogrammes each, with DPV of a N38,648,800. He added that 67 compressed wraps of Cannabis Sativa were also intercepted, along with three suspects, saying the suspects and the offending items have been handed over to the National Drug Law Enforcement Agency (NDLEA) for further investigation and prosecution in line with statutory regulations.

Jaiyeoba stated further that the command also intercepted nine vehicles being used to convey smuggled items, 80 pieces of used tyres, 16 sacks of second-hand shoes and bags, 45 bales of second-hand clothings, 2,015 cartons of frozen poultry product, 16 kegs of vegetable oil of 25 litres each, as well as eight cartons, two cartons and four packs of medicaments, computer accessories, and other household items respectively. He put the DPV of all the seized items at N151,003,043.

He, however, recalled that between February 17, 2022 and March 10, that he addressed the press conference in Ibadan, a total of 101 drums of PMS of 200 litres each, and 609 kegs of PMS of 25 litres each were intercepted within the area of coverage of the command.

Jaiyeoba, who acknowledged the collaborative efforts of sister security agencies in the achievements recorded so far, reassured the people of Oyo and Osun States of the command’s resolve to continue to improve on service delivery by suppressing smuggling in accordance to all Extant Laws guiding the service delivery, “thereby safeguarding our people from consumption of unwholesome products.

“As a command, we shall not relent in our efforts to suppress smuggling, as we shall continue to work on intelligence and ensure we deploy all available resources in accordance to all Extant Laws as enshrined in the Customs and Excise Management Act (CEMA) Cap C45, LFN 2004 as amended to keep the states of Oyo and Osun safe from all economic saboteurs.”