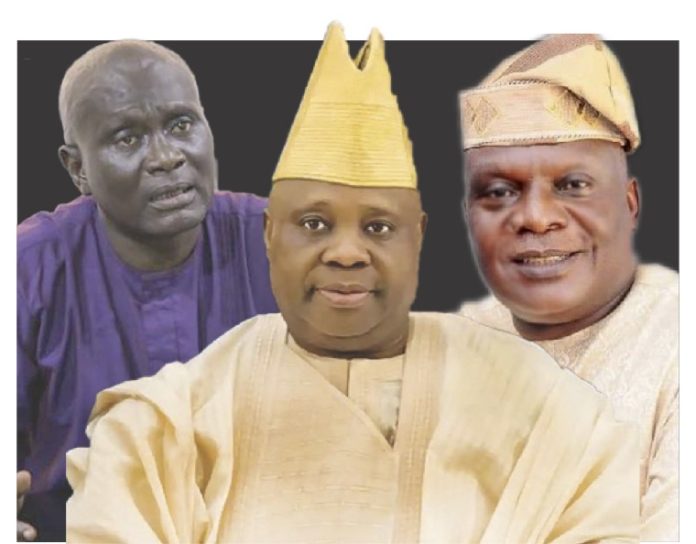 Again, two persons were reportedly killed in the delegates ward congress held recently as the exercise was characterised by violence. Now, the party has fixed March 7 for its governorship primary despite the unceasing wrangling in the party.

The leadership crisis has prevented the party from playing the opposition role, as well as making it difficult for the party to plan for the July 16 governorship election in the state.

The PDP has had three chairmen within four years and none of them has been unanimously recognised by party members who are divided over who to follow among the leaders.

Sunday Sun findings showed that Ademola Adeleke has been funding the party single-handedly by sharing money and foodstuffs to all the wards during festivals and the lockdown.

He was said to have bought the party secretariat for N120million before the Adagunodo’s faction went to form parallel group by purchasing their secretariat very close to Ademola Adeleke/Sunday Bisi’s faction own .

The removal of Soji Adagunodo was the beginning of the polarisation of PDP in Osun. While Adagunodo was removed in 2020 on allegations of maladministration, anti-party activities, among others, levelled against him by the disciplinary committee, findings revealed that his suspension was occasioned by his loyalty to former Governor Olagunsoye Oyinlola who just returned to the party and might work against the interest of the Adeleke dynasty to clinch the ticket of the party again in 2022.

The deputy of Adagunodo, Sunday Bisi was asked to step in, but Adagunodo went to the court to challenge his removal thus further dividing the party.

At the meeting where the decision to make Ojo the chairman was Sanya Omirin, Akin Ogunbiyi, Alhaji Fatal Akinbade, and Dele Adeleke, who are all aspirants in the governorship election. They were all believed to be working against the return of Senator Ademola Adeleke.

A letter dated February 18, 2022, signed by the National Legal Adviser of the party, A.K Ajibade (SAN) and acknowledged by the Independent National Electoral Commission (INEC), warned Wale Ojo against parading himself as acting chairman of the party.

Now that a faction has recognised Sunday Bisi as the state chairman of the party, another faction believed that Wale Ojo who was asked to replace Adagunodo upon court decision remained the chairman. This also divided some leaders of the party as the former National Vice Chairman, Southwest, Alhaji Tajudeen Oladipo, was said to be backing Dele Adeleke, the alleged appointed candidate of Governor Seyi Makinde of Oyo State.

Also, a leader in the party, Alhaji Shuaib Oyedokun and Olagunsoye Oyinlola-led group were said to be behind the candidacy of Dotun Babayemi and were making efforts to ensure that he represents the party in the July 16 governorship election.

Another problem occurred when some members of the party alleged that plans are being made by some chieftains of the party to force Senator Ademola Adeleke on the party.

A chieftain of the party believed to be loyal to one of the aspirants, Dr Akin Ogunbiyi, Abiodun Adegoke, accused the family of Senator Ademola Adeleke of attempting to force him on the party, saying “they have to bring thugs to the congress we held recently and unleashed terror on people. They’ve been trying to force Senator Ademola Adeleke by all means. He said, if they are popular as they claim, there is no need to unleash terror on the people. They want to force him on the party. They beat some of us, but only Diran Odeyemi surrendered to them.

“They can be feeling lies that they are funding the party since 2018. Only the gullible followers can fall for that. I am not one. There are many elite in PDP, nobody will coerce anybody.

“Attempts have been made to use political means to settle the crisis, but the Adelekes are not giving to it. All they want is to become the governorship candidate by all means.”

In a statement, he said: “The National Secretariat should stop Senator Bukola Saraki and his serialized attempts to subtly impose Senator Ademola Adeleke on the majority of Osun PDP critical stakeholders.

“Osun PDP wants to put it on record before the NWC that under the extant laws of the party, only the elected state chairman and executives that came into being upon their inauguration on March 25, 2018, which tenure is guaranteed and certain for four years will expire on March 25, 2022, that has the constitutional powers and legal right/backing to conduct the ward congress and  three ad hoc delegates which they duly conducted on September 25 and 27, 2021.

“We, therefore, advise that no other faction should be given any recognition unless we want to destroy the party completely and allow the ruling party, the APC, to strive in their failure of governance of the country.

“No group in Osun should be allowed to host or transport any ad hoc, congress, or primary election, on committees, the national headquarters of PDP should bring neutral and credible characters that have no affiliation with either of the groups and their names should be in public.

“Senator Saraki should face the problems of governance in PDP in Kwara and leave us alone in Osun State. He should not use his ambition and personal interest to scuttle the gradual peace process that is ongoing in Osun State.”

But, a former Deputy National Publicity Secretary of the Peoples Democratic Party (PDP), Diran Odeyemi, debunked the allegation that the leadership of the party is trying to force Ademola Adeleke on the party against the wish of other aspirants.

On whether the party is ready to accept whoever emerges in the governorship election, Odeyemi said, “that is a normal thing in a democracy. Whoever wins become the candidate and the losers will become supporters. In PDP we set up a credential committee.”

Another chieftain of the party believed to be loyal to Adagunodo/Wale Ojo faction, Funsho Babarinde, traced the crisis of Osun PDP to the Uche Secondus era, saying that the party may lose to the ruling APC if urgent step was not taken by leaders to solve the crisis politically.

He believed that going to court would not help the party, noting that limitations must be withdrawn by aggrieved members and leaders should intervene immediately.

He said: “Osun PDP has issued since the Secondrous era. Secondus as the national chairman has done a lot of untold things towards the party and a certain set of leaders in the party took that advantage to put in place some stumbling blocks in the way of the PDP governorship election.

“It might be a bit difficult for the new executives to correct some of those things since it has come and gone already. The only issue we have is that there are a lot of litigations along the line that has affected the fortunes of internal democracy and those things I can call them landmines because the team is doing what the party wants and what the court said.

“The party too has its issues. In the last couple of months, the party has been dancing back and forth. When they do anything and it’s against what the court says, they try to find a way around it. I am not an apostle of litigation or violence, political solutions are always the best for any political issues and right now the first time, PDP is harassing one another at the congress which has never happened before for about 15 years or thereabouts within the same party.

“In politics, everything is fair in a political war, but what we are advocating is, if you force yourself to get a ticket, you can’t force the people to work with you because you would be working towards failure. So, these are the concerns of some of the party leaders. The leaders would have to call those who are on the court’s side and those who are on the party’s side to find a middle ground, anything asides that may be catastrophic on the party.”

The majority of the leaders are on one side and a few other leaders on the other side, and all attempts by the leaders to resolve issues are being rebuked by some particular set of people,  If they call for a meeting and they attend, they refuse to agree on a consensus because some people have made up their mind and are ready to get it at all costs.

“We have six aspirants in this party and all aspirants are qualified but because of the things that have happened before Ayu led NWC, Secondus has positioned this set of people in such a way that plans to get rid of them would injure the party at the same time.

“Those who are on the litigation side are claiming that some things are a carryover of the Secondus era, but my conclusion is that those people that are doing this in Abuja National headquarters are not in Osun. They only have collaborations in Osun because Osun is one out of 36 states they can afford to mess us up in Abuja, they don’t care, but we that are at home are the ones who know where the shoe pinches, that’s why I said anything aside political resolution would spell doom, God forbid it for PDP in Osun.

“We have to look at the two sides and find a common ground, the moment those who want to go on litigation decides they want to go on litigation, there would be problems and those who think they have gotten the advantage and the party structure is with them because of the support they have from the national headquarters if they feel they can go and do it alone, it’s going to be a different ball game for them entirely, for me I’m an advocate of peace, litigation cannot solve this problem while violence and harassment cannot solve it at the same time.

“We have been out of government for around 12 years now and if after 12 years we have an opportunity of presenting a credible candidate, this should not be a do or die affair because after presenting aspirants, the Osun people will be the one to choose who they want. As a party, we must make sure we present a suitable candidate at least to a large extent for the Osun people to make their choice. Money is not everything, but we need money to do the elections.”

As of now, Senator Ademola Adeleke is having the support of former National Secretary of the party, Prof Wale Oladipo, former state chairman, Ganiyu Olaoluwa, Akogun Lere Oyewumi and former Chief of Staff to Oyinlola when he was the governor of the state, Peter Babalola.

They recognised and believed in the leadership of Sunday Bisi as the state chairman and this is being supported by the national headquarters.

All other five aspirants recognised and believed in the leadership of Wale Ojo who they believed is the chairman of the party in the state. This group has the support of all other leaders including former Governor Oyinlola, Senator Fadahunsi, Alhaji Shuaib Oyedokun, among others.

While the national headquarters would have settled for Senator Ademola Adeleke to become the governorship candidate of the party in the March 5 governorship primary, the other group has not settled for any candidate among the five aspirants, but they insisted that Adeleke will not clinch the party’s ticket.