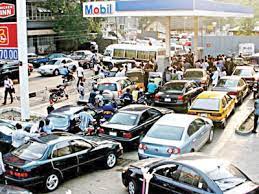 There was a long queue of vehicles in some filling stations in Osun State Wednesday while some others closed their stations firmly.

Those that were selling sold between N180 and N200 through the pump price was not changed on the metre.

At the NNPC Okefia area, Ilobu road, Osogbo, where the control price was sold, the queue was long and some commercial vehicles and Motorcyclists raised their transport fares.

Some filing stations also sold after working hours with different prices ranging from N165 to N200.

But, the Nigerian Midstream and Downstream Petroleum Regulatory Authority (NMDPRA),

said it was not aware of hoarding in any station in the state.

The Operation Controller of NMDPRA, Benjamen Ogunnubi, said, “we are not aware because our personnel went out on Tuesday and we didn’t notice anything like panic buying.

“We would also go out on Thursday to find out if there is any hoarding of the products. We can assure you that necessary action would be taken against whoever is found culpable.”