The spokesperson of the Nigerian Senate, Senator Ajibola has been named the Director-General of the campaign council for the reelection of Governor Adegboyega Oyetola of Osun State.

The Senator representing Osun Central was to lead other sub-committees in the federal constituencies to actualize the success of APC in the July 16 governorship election.

The chairman of the All Progressives Congress (APC) in the state, Prince Gboyega Famodun, announced the committee at the party’s secretariat along Gbongan/Ibadan road, Osogbo, on Thursday.

He also announced the committee in each of the nine federal constituencies that would report to the central committee.

While inaugurating the committee, Famodun enjoined the committee to work hard to ensure the reelection of Oyetola in the coming election.

Oyetola was also announced as the state chairman, of the campaign council, while Sunday Akere, the Special Adviser to the governor on Political Matter, was named the Deputy Director-General and Head of the media committee.

The committee is expected to kickstart campaigns at the Federal Constituency, Local Government, Wards and Voting Units level.

Speaking, Senator Basiru said, “the task before us is very important and yes, may be a little arduous. We however find courage by taking succor in the fact that the task has been made easy by Mr. Governor who started the preparation for the forthcoming election on the first day of assuming office as Governor. Alhaji Gboyega Oyetola, to the chagrin of naysayers and detractors, within and without our fold, has performed excellently well for Osun State.

“He has given a robust and excellent account that exemplify good governance. With the support of the State Assembly, and his sterling cabinet who have been worthy lieutenants in their assigned roles, his performance, coupled with the unprecedented achievements of our great party which began with the administration of Baba Akande are visible for all to see.

“In fact, the giant strides of Alhaji Gboyega Oyetola, have put us in very good stead as the Party to beat in the forthcoming election. His scorecard in labour and industrial relations, infrastructure, health, education, and security among others is our primary weapon of canvassing for votes. This is how we can encourage the electorates to vote for our Party.

“I implore us to be very alive to our assigned responsibilities. It is given that we are pivotal to the success of our Party at the polls and we must begin by propagating the achievements of Governor Gboyega Oyetola as the fulcrum of our engagements with our people on why our Party deserves to be voted for and our candidate returned as the next Governor of Osun State.” 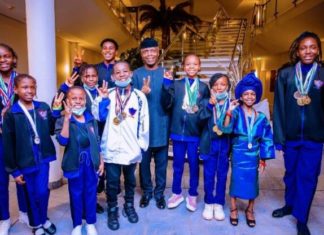