The Nigerian Automobile Technician Association (NATA) on Thursday endorsed and passed vote of confidence in the administration of Governor Adegboyega Oyetola of Osun State for turning around the socio-economic of the State.

The artisans also professed their readiness to vote massively for the re-election of Oyetola in the July 16 governorship election.

They promised the Governor over 10,000 votes saying all their members across the State will vote massively to ensure his return.

Speaking on behalf of the members of NATA, the Southwest Zonal Vice Chairman, Comrade Samson Odewale, said they have resolved to mobilize massively to get Oyetola elected.

Odewale who lauded the Governor for his continued support to workers particularly those in the informal sector, said no amount of persuasion will make them to deviate from the cause to get him re-elected.

“We are endorsing Mr Governor for a second term because of his modest achievements in the last three and a half years. We are not politicians but as citizens we have seen every reason to support a government that means well for the people.

“As artisans, we have so many reasons to support the Governor for what he has been doing particularly stimulating the economy of the state without borrowing a Kobo anywhere in the world.

“In view of our work as professionals whose impact to livelihood is central to the economy and daily living of the citizens, we have seen the pace of progression in all strata of the economy in the State since the assumption of the present Administration.

“So, we are here to show our love, our passion and interest in the administration that has turned around the fortunes of the State with the meagre resources available to us as a State. It is a known fact that our amiable Governor has proved his capacity to take Osun to greater heights.

“We have already mobilized our people and I can assure you that over 10,000 members in Osun will vote for him. He has proved to us that he is capable and to us, we have assessed and measured his performance and we have come to conclusion to support him and vote massively for him.

“To us what Mr Governor has done without resorting to borrowing the is not only unprecedented but undoable for many of his colleagues, Mr is why we have rated him as the best Governor whose positive impacts have been tremendously felt across sectors.

“Most importantly in the areas of education, road infrastructure, health, security, workers’ welfare, agriculture and most importantly the execution of people-oriented policies and programmes that had helped in no small measure on the general welfare and well-being of the citizenry”, he added.

Also speaking, the newly-elected State Chairman, NATA, Comrade Muideen Azeez, attributed their endorsement to the good works of the Governor saying his administration has been very impactful.

“We are here to tell the world where we belong. We want the entire world to know why we have resolved to identify and endorse the governor for second term.

“As artisans, the policies and programmes of Mr Governor have been very impactful on the lives of the citizens particularly the artisans. This is a government that has been paying full salaries regularly, constructing several kilometers of roads, providing quality and qualitative education, guaranteeing the security of lives and property of the kilometres above all, and implementing policies that are pro- masses.

“We are assuring the government of our maximum support and huge votes in the next governorship election and I urge the people of the State to vote for him because he has done and performed excellently well”, he added.

In his remarks, Governor Adegboyega Oyetola commended the association for their unflinching support for his administration, describing them as one of the very critical stakeholders to the Osun project.

Oyetola, while commenting on the Association’s praise for his administration’s prioritisation of woiners’ welfare, reiterated his commitment to improved welfare of workers in the state, saying he will continue to do what is necessary for the wellbeing of the people and prosperity of the state.

According to him: “I am happy with your coming this morning. You have shown us unflinching support and we acknowledge that support. We have tried our best to patronize your association in our wa but we have also indirectly contributed to your businesses by improving the welfare of our workers.

“I value was so much because I know that it is not fair for them to work without getting paid as and when due. God has honoured my commitment in ways that beat my imagination. God has always made a way of escape for us amid the scarce resources.

“The beauty of this commitment is imaginations increased patronage of businesses in the state make bold to say that your businesses are thriving because the purchasing power of our people, especially workers, has been tremendously improved.

“We are not relenting. We will continue to do what is necessary for the prosperity of the state and our people and I trust that none of us will regret our associations together”, Oyetola said.

NATA members had earlier embarked on a solidarity walk from the popular Nelson Mandela Freedom Park to Government House, Osogbo, to register their support for the Governor who they described as a man of the people. 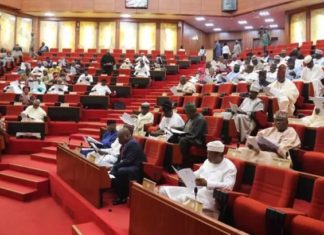