A former Vice-President and presidential aspirant under the platform of Peoples Democratic Party (PDP), Alhaji Atiku Abubakar, has expressed displeasure over refusal of party members to settle their grievances with just two months to the governorship election in Osun State.

He called on party members to unite and fight the ruling party if they would win the July 16 governorship election.

Speaking at the PDP secretariat in Osogbo, on Sunday, during his consultation visit, Atiku warned PDP to settle the crisis so that 2018 history would not repeat itself.

He noted that the party lose the 2018 election became of failure to resolve the internal crisis, saying the same may happen if the necessary step was not taken.

“There is something that worries me about this state, Osun. In the last election, there was disagreement with PDP against PDP that made us lose the election. Now again, we are going towards a crisis in 2022. One of the reasons I am here is to appeal to your unity ahead of the poll so that you can win no matter the grievances.

“You can see what disunity cost in the last election and we lost it, don’t let us repeat the same mistake. I beg of you the leaders and chieftains of the party. This election is the stepping stone to the general election and it is very key.

“I make this appeal to you the caretaker chairman. I want to also urge you to support me in the forthcoming primary election and general election.

“I have the right experience to tackle the Nigeria challenges of insecurity and disunity. When our administration led by Olusegun Obasanjo came in we had similar challenges and we are able to solve it. When I become the president I will ensure restructuring for this nation,” he added. 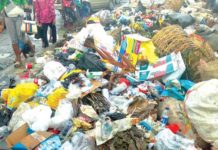