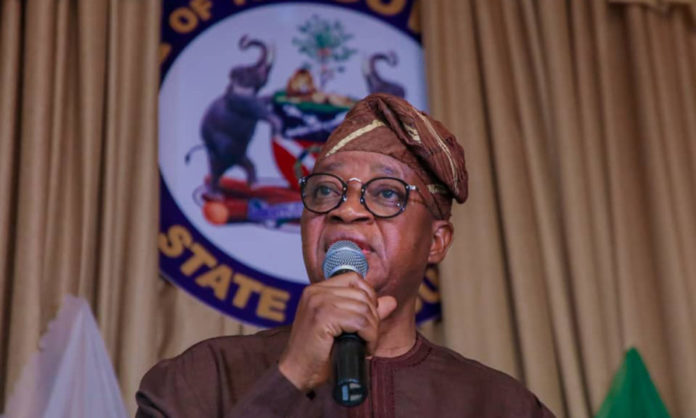 Barring last minute change, Governor Gboyega Oyetola of Osun State appears set to emerge the candidate of the All Progressives Congress (APC) for the July governorship election in the state.

Oyetola who contested against the former Secretary to Osun State Government, Alhaji Moshood Adeoti, and former Deputy Speaker of the House of Representatives, Hon Lasun Yusuf, was leading in the election conducted in all the wards across the 36 local government areas of the state.

Results released in many of the wards as at the time of filing this report showed that Oyetola was leading his opponents with a wide margin.

Aregbesola who led a faction of the APC, ‘The Osun Progressives (TOP), could not deliver his ward to his announced candidate, Moshood Adeoti. While Oyetola polled 309, Adeoti scored 146 in Aregbesola’s ward.

The Chairman of the APC faction in the ward, Adegoke Saheed, blamed the loss of the ward for the absence of Aregbesola, alleging that the committee favoured Governor Oyetola.

Findings revealed that Oyetola won in almost all the polling centres in the state, defeating both Adeoti and Yusuf.

However, a faction of the party loyal to the Minister of Interior, Mr Rauf Aregbesola, alleged that the election was marred by irregularities.

A statement issued by the publicity secretary of the faction, Mr Abiodun Agboola, alleged that the election was marred by a series of irregularities attributed to the faction loyal to Oyetola.

Agboola said: “We strongly condemn the conduct of the primary election because it is nothing but a sham with a fraudulent process to favour Governor Adegboyega Oyetola.

“Verified information from the agents of Alhaji Moshood Adeoti, our governorship aspirant, indicated that there were no record and result sheets in any of the 332 wards of the state.

“Also, there was no proper accreditation in majority of the ward collation centres where voting took place. The accreditation done in some places were skewed in favour of Governor Gboyega Oyetola as members of the group were allowed to pass through accreditation process without much ado.

“Names of a sizeable number of members of the APC who wanted to vote for Adeoti were missing in the register of the party. This we had envisaged by calling for the display of party register before the conduct of the primary.

“We also need to inform the general public that appointees of Governor Oyetola were used as collation officers, which made the rigging plan of Oyetola an easy task. This we strongly condemned yesterday at the stakeholders meeting with the primary committee,” he added.

Meanwhile, Governor Oyetola has expressed confidence that he would emerge victorious in the ongoing primary election of the party.

The governor who applauded the members of the party for turning out in large number, said: “Losing was not an option for a man commissioned by God for an assignment.”

He lauded Osun people for conducting themselves peacefully, saying the peaceful conduct of the election had testified to the fact that Osun remains the most peaceful state in the country.

The governor noted that news of violence making the rounds were mere speculations.

Oyetola, however, appealed to the citizens across the state to maintain peace and decorum, adding that elections should not be a battle.

“By the grace of God I will emerge victorious. To us, losing is not an option for a man commissioned by God for an assignment.