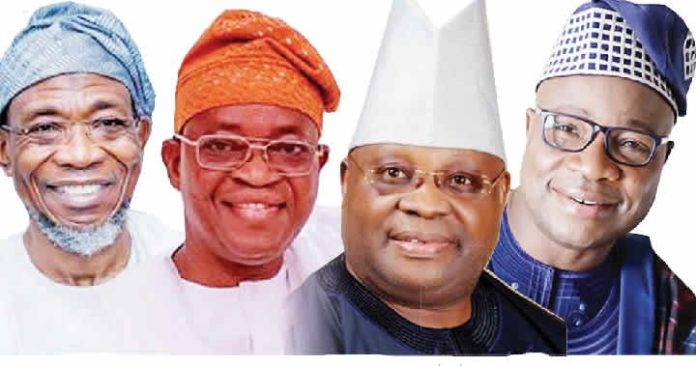 Less than seven months to the governorship election in Osun State, two major political parties; the ruling All Progressives Congress and the main opposition, the Peoples Democratic Party, have continued to grapple with internal crises. The crises bedevilling the parties, which has cast a hazy atmosphere on their chances at the poll, is of concern to many followers of the political trend in the state. The observers are of the opinion that the pre-election and the poll proper may be fraught with avoidable tension.

Going by the time-table released by the Independent National Electoral Commission, the governorship election being the fifth since the return of democracy in 1999 would hold on July 17, 2022. To kick-start activities towards the poll, interested aspirants had started obtaining forms to show their intent of vying for their various political parties’ tickets, as they (political parties) plan their primaries. But as the months thin into weeks, the turbulence threatening to yank off the ship of the parties has refused to abate and showed no sign of readiness to cease any moment soon.

APC, the ruling party in Osun, has not known peace since the formation of ‘The Osun Progressives’, a group backed by the Interior Minister, Rauf Aregbesola. The minister was the immediate past governor of the state while the current governor, Oyetola, was his (Aregbesola) Chief of staff for eight years. The group had gone ahead to produce factional party executives from ward to state level and put pressure on Ileri Group, the political organisation of the incumbent governor.

Also, the group (The Osun Progressives) had listed the dumping of certain policies initiated by Aregbesola, clampdown on anyone that associated with the ex-state helmsman, and acceptance of former Osun deputy governor, Senator Iyiola Omisore, into the APC as some of the ‘sins’ committed by Oyetola.

But beneath these reasons, lies deep-seated personal discontentment each of the arrowheads of the fight on Aregbesola side has against either Oyetola or some of his loyalist. Led by ‘Lowo Adebiyi, a kinsman to ex-governor Aregbesola from Ijesaland, TOP had even mounted opposition stronger than the one provided by the main opposition party, the PDP, against Oyetola administration, by constantly calling to questions some government’s initiatives.

Beside the fact that the ruling party which has been factionalised into Ileri Oluwa Group, loyal to Oyetola, and led by Prince Adegboyega Famoodun and TOP, loyal to the former governor, Aregbesola, many bigwigs in the APC have also been weighing their options and pitching tent with either of the two camps.

However, many non-aligned members had secretly hoped the squabbles in the party would somehow give way for peace in the course of the recently concluded congresses. But the congresses had thrown up fresh rounds of misunderstanding in the party even with just few weeks to the governorship primary of APC, as Oyetola took firm charge of all structures of the party recognised by the national leadership to the chagrin of those in the opposing group.

While Aregbesola’s men had placed demands for Oyetola’s resignation from the APC interim national leadership, ratification of congresses conducted by the group and recognition of its members by government before the Abudulahi Adamu-led National Reconciliation Committee, the group has also said it would not withdraw the case it instituted against the ward congress until it got favourable decision from the party’s leadership.

Adebiyi, in an exclusive chat with The PUNCH after his group’s meeting with Adamu’s committee, said Oyetola must quit his position in the National Caretaker Committee to ensure fairness in the governorship primary and for peace to return to the party.

The camp of the incumbent governor, in a swift response, told the committee to disregard demands of Aregbesola’s group, but called for total reconciliation to put the party in good stead ahead of the next governorship poll.

Making the stand of the camp known during a meeting with the committee, the Osun APC Secretary of Congress Committee, Sunday Akere, said, “Their prayer asking the Reconciliation Committee to recognise their congresses is misplaced and distractive because the committee is to appeal to frayed nerves to give peace a chance and not deciding on the long-concluded congress.

“They are already holding meetings with the opposition and a faction of the said opposition in the state now takes the responsibility of protecting and defending them as a matter of life and death. The TOP members have no right whatsoever to dwell on issues that do not concern them as their demand for the resignation of Mr. Governor from the APC National Caretaker Committee connotes.

“And finally, this committee should implore the immediate past governor and current Minister of Interior, Ogbeni Rauf Aregbesola, to rein in TOP members because he publicly declared that he is their patron and that he supports whatever they do.”

Commenting on the chances of the APC in the governorship poll, even while approaching the election with a divided house, Lani Baderinwa, the state Secretary of Aregbesola faction of APC, said electorate were not displeased with the ruling party, but with the governor. He declared that the APC still had a bright chance of winning the poll but called for genuine reconciliation and reorganisation in the party.

“We have been talking about peace, reorganisation of the party to have a good vehicle conveying us back to the Government House.  We are confident of victory for the APC. It is an individual that people in town do not want and not our party. We are working to provide a credible alternative to the person they don’t want in town,” Baderinwa concluded.

Expressing similar optimism, the Special Adviser, Political Affairs to the Governor, Akere, who is also the Secretary of the APC Congress Committee in the state, said the unrest had nothing to do with the party’s chances of winning the governorship election in July.

“Presently, all the factions in the party are members of the same family and as progressives, we always have a way of resolving internal wrangling. I am assuring you that the moment a candidate emerges, every other party member will line up behind him for the success of the party. The reconciliation committee has come and listened to both sides and we have a tradition; no one will defect to opposition party. Before the election, our house will be in order,” Akere said.

From the main opposition party’s angle, not long after the Supreme Court had affirmed Oyetola’s victory more than three years ago, the PDP in Osun relapsed into fight over who leads it in the state.

Mr. Soji Adagunodo, the chairman that led the party during 2018 governorship poll had fallen out with the candidate of the party in the poll, Senator Ademola Adeleke, and the aftermath of the disagreement was an upheaval which climaxed in his suspension by the Uche Secondus-led National Working Committee and appointment of Mr Sunday Akanfe, as acting chairman.

The national leadership of the party later asked Akanfe to revert to his previously held post of Deputy State Chairman, while Mr. Sunday Bisi was appointed as new Osun State Chairman of the PDP. Adagunodo, through a court decision, was reinstated and he opened a parallel party secretariat few meters away from the one operated by the state leadership supported by Adeleke.

Both Adagunodo, backed by Dr. Akin Ogunbiyi, who lost the governorship ticket to Adeleke in 2018, and Bisi had continued to lay claim to the post of chairman of the party. In the course of the search for peace, Adagunodo, was appointed the South-West Vice Chairman of the party replacing Taofeek Arapaja, after his election as PDP Deputy National Chairman, South. It was learnt that those behind the move had planned making Bisi the state chairman.

But the move appeared failing to restore peace to the troubled party. After Adagunodo’s elevation, the East Senatorial leader of PDP, Wale Ojo, unilaterally stepped into his shoes, and laid claim to the seat of chairman, thereby returning the party to the era of two men claiming to be its state chairman. Few weeks to the governorship primary, the situation remained unchanged regarding the issue of state chairman, making many watchers of political trend to doubt the readiness of the PDP to capitalise on the unrest in the ruling party to return to power.

Presently, the Bisi-led executive has endorsed the 2018 candidate of the party, Adeleke for another chance to flag the party’s flag but five other aspirants, associating with Adagunodo’s group had signified intention to vie for the party’s ticket.

Speaking on the chances of the PDP despite battling internal wrangling ahead of the next governorship poll in the state, a party chieftain belonging to Adagunodo group, Funmiso Babarinde, and the Director of Media and Strategy of Adeleke-backed State Working Committee, Oladele Oluwabamiji, said once a candidate emerged, the crisis would fizzle out.

Babarinde, who said the party would repeat the feat it achieved in 2018 when it led the ruling party in first ballot, however, called on stakeholders to find ways of bringing all displeased members under one umbrella to further brighten its chances. He said, “We don’t have any serious issue that can stop us from winning the next election. Once our candidate emerges, the noise will go down and we will all line up behind him. The PDP will repeat and even better the feat of 2018 when we won the governorship poll before ‘remote control’ was used to change it. People should expect us in Government House later this year.”

The former Executive Assistant on Students Matters during the Olagunsoye Oyinlola administration hinged the struggle for the post of chairman on the diverse interests that wanted to get governorship ticket. Rather than the situation being a drawback, Babarinde opined that it was an indication that the PDP leadership had given its members the opportunity to aspire and freely express their intentions.

“I know of a particular political party that will also be fielding a candidate for Osun governorship poll but you can’t freely aspire to be anything there. A tiny group of people will decide everything in that party. That is not how a democratic party should run. What you call crisis in our party is an indication that people enjoy good measure of freedom.”

Expressing similar opinion, Oluwabamiji maintained that the signals were clear about people’s acceptance of the PDP and allayed fears of disintegration as the battle for the control of the party thickens.

“Without any fear of contradiction, the PDP is set to take over seat of power in the state. What many outside partisan politics would regard as crisis is not in actual sense. A candidate will emerge and the party will approach the election as a strong unit. That is what will happen,” Oluwabamiji concluded.