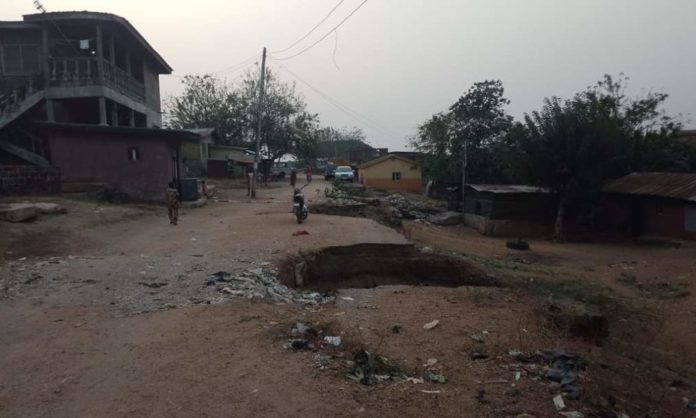 The deplorable state of roads within Osogbo, the Osun State capital, is giving residents cause for concern.

DAILY POST reports that the worst hit are the residents of Adetona Street and Asubiaro area of the State.

The residents of the street, which is opposite the Osun State Specialist Hospital, Asubiaro, Osogbo, claimed that over the years, successive administrations in the State had made lots of fake promises as regards the rehabilitation of the street.

The road, which serves as an alternative route for commuters linking Isale Osun, Oja-Oba and Sango-Orioke areas of the State capital to the State hospital, is now in an advanced state of neglect.

Economic activities in the area have also been paralysed, as many business owners have been forced to close their shops.

The road, it was gathered, was constructed during the old Oyo State and no government in Osun has ever rehabilitated it since its creation in 1991, till date.

Afeez Hamzah, a resident of the area revealed that the community has resorted to self help as successive administrations have refused to fulfill their promises of reconstructing the road.

Hamzah also noted that the poor condition of the road may lead to flooding in the area as the raining season approaches.

However, the State Commissioner for Regional Integration and Special Duties, Lekan Badmus, has visited the community with a promise that the government would rehabilitate the road.

Also, Governor Adegboyega Oyetola had visited the road and adjoining streets on multiple occasions to inspect levels of damage, with a promise to reconstruct it.

The state government, in December, 2021, listed some roads and streets across the State and announced its intention to rehabilitate and reconstruct them, but Adetona street was not included.