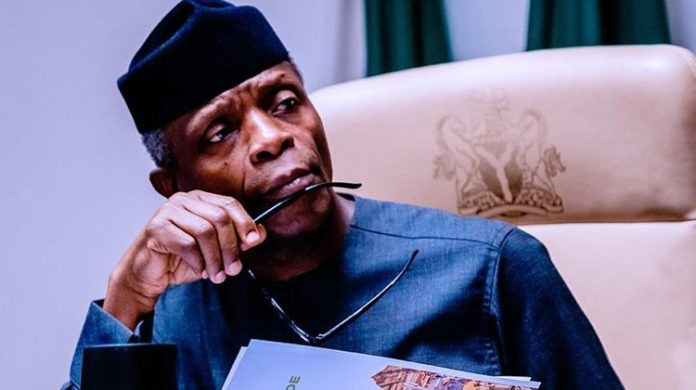 Speaking at the thanksgiving and celebration of life service for the late Okowa at St. Michael’s Anglican Church, Owa-Alero, in the Ika North-East Local Government Area of Delta State, Osinbajo described him as a devout Christian whose legacy of faith, character and selfless service would continue to be remembered.

Similarly, Obaseki commiserated with Okowa and the people of Delta State, while extolling the indelible legacies the deceased left behind.

Osinbajo, in a statement by his Senior Special Assistant on Media and Publicity, Laolu Akande, described the late Okowa as an outstanding educationist, committed public servant, and progressive.

The Vice President said the deceased “took education and discipline so seriously that he made it his life’s work, that he saw public service as a calling, and politics as an important component of service to one’s community and to one’s people.”

Obaseki described him as a revered community leader who exuded uncommon love and grace that endeared him to all.

Earlier, Okowa said, “My father lived a worthy life as he impacted positively on the development of society. He was a teacher, known for discipline and he impacted so much in the lives of those who crossed his path in life.”

Other dignitaries at the event were former Vice-President Atiku Abubakar; Governor Nyesom Wike of Rivers State; and his Akwa Ibom and Sokoto counterparts, Udom Emmanuel and Aminu Tambuwal, among others.