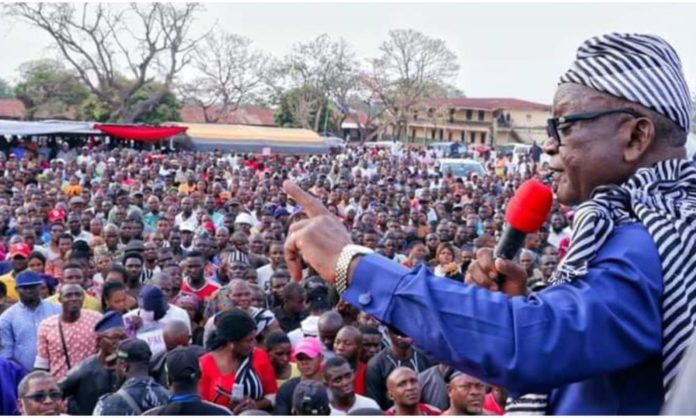 Benue State Governor, Samuel Ortom, says the triumphant outings of the Peoples Democratic Party, PDP, in various elections across the country is an indication that the party will return to power at the centre and win more states at the 2023 general elections.

Governor Ortom spoke Friday, March 4, 2022, in Adikpo, Kwande LGA, while receiving defectors from the All Progressives Congress, APC, and other political parties into the PDP.

It also won 44 out of 62 councillorship seats in the FCT as well as the bye-election in the Jos North/Bassa Federal Constituency seat in Plateau State.

The Governor explained that it is obvious that Nigerians have rejected the APC for bad leadership as such, there is no justifiable reason why a Benue person that is being hunted by militia herdsmen with active support from the APC-led government at the centre to leave the PDP for the APC.

He assured the lead defectors and their teeming supporters of equal opportunities in the party, pointing out that the PDP believes in justice, fairness and equity.

State Chairman of the PDP, Sir John Ngbede, who was represented by the party’s Deputy Chairman, Hon Isaac Mfo, said the party is happy with its growth in Benue North East through the sagacity of Senator Suswam, Rep Bob Tyough and other leaders.

Other speakers including former Speaker of the Benue State House of Assembly, Chief Mrs Margaret Ichen, House of Representatives Member for Kwande-Ushongo, Hon Bob Tyough and Chief Mimi Orubibi, said the people of Kwande are leaving the APC in droves because they see nothing good in the APC.

One of the leaders of the defectors and former Chairman of Kwande LGC, Hon Terhile Iorchir, said Kwande owe Governor Ortom “a debt of gratitude for his support for them” and expressed hope that Kwande will be supported to produce the next Governor of the state in 2023.

Other leaders who joined the PDP with their supporters include retired Colonel Basil Kwembeh, Hon James Vandefan, Engineer John Ikyembe, Hon Samuel Uke and Hon Moses Ichor as well as thousands of their supporters.