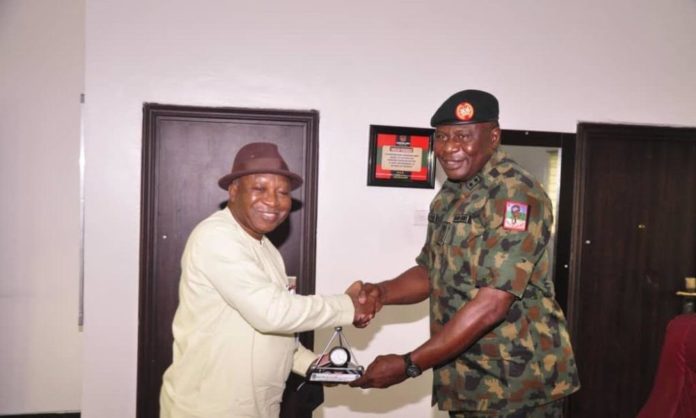 Nigerian Army has called for the intervention of the Presidential Amnesty Programme (PAP) to end illegal oil bunkering in the Niger Delta region.

He identified some of the perpetrators as ex-agitators, who were ignorant of the harm they were doing to the region’s environment.

Oluyede said the Army was ready to partner with PAP and other relevant institutions and agencies of government to end the environmental menace.

The GOC, 6 Division, Port Harcourt, also commended Dikio for making PAP a successful platform to sustain the peace in the region.

‘We commend you on the remarkable success you have recorded since your appointment and urge you to continue. We also want you to intervene in the issue of illegal oil bunkering,’ he said.

In his remarks, Dikio promised to intensify awareness on illegal oil bunkering, describing it as a detrimental contributor to the health of the people.

‘We are creating more awareness on the issue. Recently, some of our delegates, ex-agitators held a sensitisation workshop here in Port Harcourt, as part of our efforts to end illegal oil bunkering,’ he said.

‘Let me state that anyone involved in “kpofire” is like a murderer. They’ve made the atmosphere in and around Port Harcourt a health hazard. That is how bad it is.’

Dikio asked persons involved in illegal bunkering to redirect their energy into the palm oil business.

‘Rather than engage in kpofire business which endangers the health of the people in the region and in addition destroy our environment and ecosystem, it is better to go into palm oil production.

‘That is a very lucrative business. A ton of palm oil currently above $5,000 which is a lot more than a ton of crude oil can fetch.,’ he said.