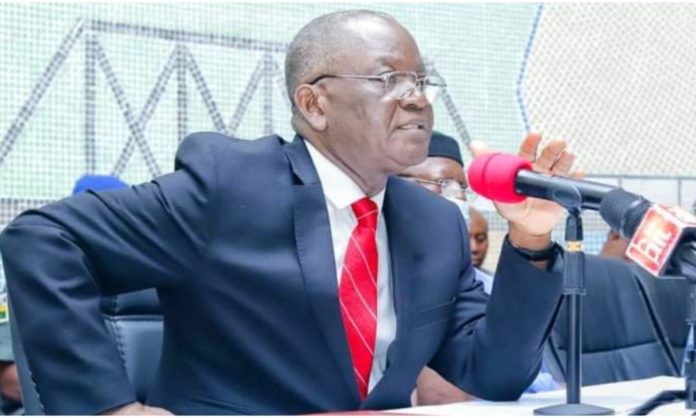 Benue State Governor, Samuel Ortom, says he has forgiven all Idoma people who chose to vilify him over the selection of the new Och’Idoma, Dr. John Elaigwu Odogbo.

Governor Ortom stated this Tuesday, February 8, 2022, at the New Banquet Hall of the Benue Peoples House, Makurdi, when the people of Agatu led by the new Och’Idoma and other traditional rulers, paid him a thank you visit on the selection of their son as fifth paramount ruler of the Idoma ethnic group.

The Governor also asked the Och’Idoma and the state chairman of the Peoples Democratic Party, PDP, John Ngbede, to forgive those accusing them for allegedly having a hand in the selection of the fifth Och’Idoma.

The Governor decried the level of falsehood peddled by certain individuals in Idoma land who deliberately failed to acknowledge the neutrality the state government put in place to ensure a hitch free selection exercise.

He maintained that he had no hand in the emergence of Odogbo as the Och’Idoma V, because, according to him, “the entire selection exercise that produced the new Och’Idoma was carried out following the laid down processes as enshrined in the Benue State chieftaincy law.”

He expressed dismay over the falsehood that is being spread by certain Idoma people, particularly some elites who he said had chosen to deliberately vilify him for failing to achieve their ambition “but as a God fearing man, I have forgiven them. I have asked the Och’Idoma and our party chairman to also forgive them.”

The governor called on the Idoma nation to unite and work with the new Ochi’Idoma.

Governor Ortom said due process was followed in the selection of the Och’Idoma and cannot be reversed, stressing that the law is above tradition and must be clearly understood in that manner.

On his part, Ochi’Idoma, His Royal Majesty, Elaigwu Odogbo recounted his humble beginning, which prepared him adequately for every task God brought his way.

He assured that his emergence will bring unity to the Idoma nation while calling on Idoma sons and daughters to unite and move the Idoma nation forward, stressing that they should avoid internal wranglings at all times.

The Paramount ruler of the Idoma nation encouraged the Governor not to be despaired, describing him as a project in the hands of God.

John Ngbede in a remark, dismissed the allegations that the Ochi’Idoma was forced on Idoma people by the governor, saying the Governor only provided a level playing ground through a robust Chieftaincy Law which has given the Agatu people the opportunity to produce the Ochi’Idoma.

Commissioner for Information, Culture and Tourism, Michael Inalegwu thanked the Governor for protecting the local government from complete annihilation by militia herdsmen.

He informed the governor about the renewal of attacks on the local communities by herdsmen in the area in large numbers and called for the deployment of more security operatives to checkmate their activities.