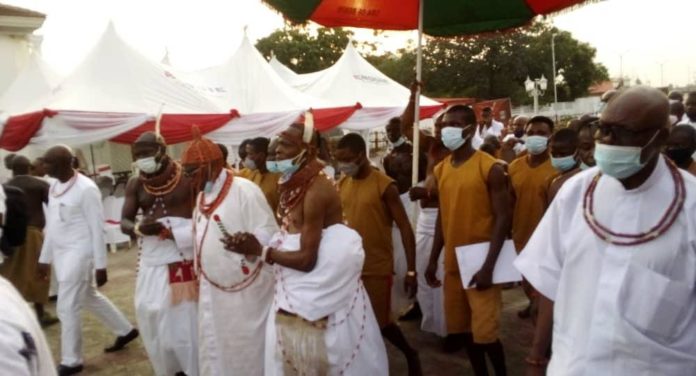 The Oba of Benin, Oba Ewuare II, received the Cockerel valued at £2 million and the bronze head of an Oba valued at £500, 000 from Jesus College, Cambridge University and the University of Aberdeen, Scotland both in the United Kingdom, respectively.

The two artifacts were among thousands of works of art looted from the Oba Palace during the 1897 British invasion of Benin.

Presenting the returned artifacts to the monarch at his Palace in Benin City, Amb. Tunji Ishola, said they were at the palace on the express mandate of President Muhammadu Buhari to personally present the items to the Oba of Benin.

“I must say I am here just for one assignment. I am directed by Muhammadu Buhari, the President of the Federal Republic of Nigeria. My assignment is very simple, to directly bring these objects to Oba of Benin Kingdom. That is the presidential directive”, he said.

Appealing to the people of the great Benin Kingdom to join hands with the Oba to preserve the artifacts as they were preserved for 125 years since they were looted from the kingdom, Ishola said the Cockerel is placed at £2 million and the bronze head of the Oba is £500,000.

“I want to thank British Government for preserving the artifacts to still be in the same form they were when they were taken in 1897.

Also speaking, Director-General, National Commission for Museums and Monuments, Abba Tijani, said the commission has been at the forefront, pushing for the repatriation of all stolen artifacts back to their original owners.

He said he has constantly reminded those holding unto the looted artifacts that the artifacts represent the culture and heritage of the Benin Kingdom and not just artifacts and so, they should return them to their original owners.

He said today, history has been made and that they have been finally returned.

In his remark, the Oba of Benin, Oba Ewuare II, said the military expedition by the British was not a retaliation for the killing of some British soldiers as most of the literature would have us believe.

The Oba, whose speech was delivered by Prince Aghatise Erediauwa, said the truth is that there was a calculated and deliberately conceived plan to attack Benin for its territorial dominance and also for her treasures.

He said the result was a destruction of a civilization that equalled or even surpassed that of the aggressors.

The Benin monarch stated that it was thought that the kingdom, totally decimated and in ruins in the aftermath of the war, would not rise again adding that by the grace of God and their ancestors, they are still standing.

He disclosed that the current conversation is about restitution and that the International scholars and most museums now agree that keeping stolen items is immoral and illegal.

The Oba thanked President Muhammadu Buhari and others who have worked for the return of the artifacts, just as he called on genuine collaborators to join in the push of the return of others that are yet to be returned.

On his part, the Edo State Governor, Mr Godwin Obaseki, represented by the Commissioner for Local Government and Chieftaincy Affairs, Monday Osaigbovo, said his administration would liaise with the Oba of Benin to ensure the return of other artifacts to the palace.