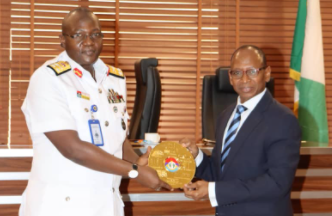 The Office of the Accountant General of the Federation is to sponsor Treasury staff for training in relevant courses at the National Defence College.

The Accountant General of the Federation, Ahmed Idris FCNA who dropped the hint in Abuja, noted that this initiative will broaden the horizon and enhance the capabilities of Treasury officers.

He noted that the National Defence College is one of the prestigious colleges in the country, adding that the Treasury was pleased to be associated with the content and activities of the College.

Idris, while addressing the Commandant of the National Defence College, Rear Admiral M. M. Bashir, who led the management team of the College on a courtesy visit to him in Abuja; called on the Defence College to make known the relevant courses and assured that Treasury officers will be sponsored to attend.

The AGF, who also accepted the invitation of the Commandant to be a resource person and guest lecturer at the College, tasked the leadership of the National Defence College on prudent management of resources and assured of prompt release of approved funds for the College.

He congratulated the Commandant on his recent appointment and applauded successive leadership of the College, whose efforts he acknowledged contributed to the present heights the College has attained.

On the activities of the Nigerian Army, Idris applauded the gallantry of Nigeria soldiers, especially in the fight against insurgency and promised that the Treasury will continue to support the Nigerian Armed Forces in every possible way.

Speaking earlier, the Commandant of the National Defence College, Rear Admiral M. M. Bashir acknowledged the efforts of the Treasury in implementing policies to enhance transparency and accountability in the management of government resources.

He thanked the AGF for the release of funds to the College and made a case for training of Treasury officers at the College.