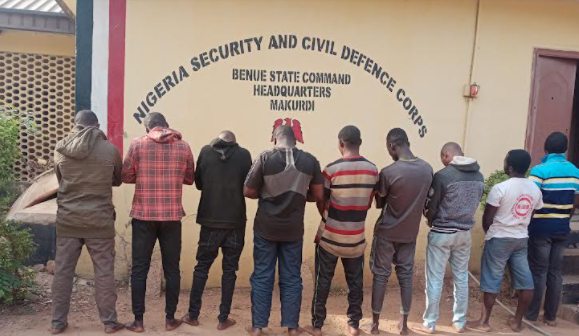 The Benue State Command of the Nigerian Security and Civil Defence Corps NSCDC has paraded nine suspects for various other criminal offences.

The suspects included kidnapers who abducted a vehicle with 18 passengers, three suspects who were arrested for diversion and adulteration of a tanker loaded with 33,000 liters of petroleum products as well as those who were nabbed for criminal conspiracy and willful destruction of critical national assets and infrastructure valued at over N20 million.

He explained that the suspected kidnappers identified as Sabastine Hidejime and Abraham Toryem had abducted a bus with 18 passengers on December 12, 2021.

“The bus took off from Artisan Market in Enugu, Enugu State on 12th December, 2021 and was abducted with 18 passenger on board near Federal University, Wukari in Taraba State and was taken to Ukum LGA of Benue State.

Okoh said one of the kidnapped victims was later released after paying a ransom of N300,000 while the others were still in the custody of the abductors.

He said unknown to the suspects, the bank account that was used to collect the money was being tracked and as soon as the money was paid into it, the account was blocked and the matter reported to NSCDC.

It was later to be discovered that the said account belonged to a POS operator who, out of ignorance, gave it to a customer to transfer the said money without knowing that it was for ransom.

Others who were paraded are Yaya Umal, Abubakar Sadik and Shittu Ismail who were arrested at Howe, Gwer East LGA with three tricks of railway materials.

The Command also paraded Adamu Baffa, Abubakar Usman and Usman Abbah who were arrested at Vandeikya LGA for being in possession of a tanker load of adultrated petroleum products.

Speaking to newsmen, all the suspects confessed to the various crimes and the roles each of them played either willfully or ignorantly.

The state NSCDC boss said all the suspects would be charged to court after completion of investigation into the various cases. 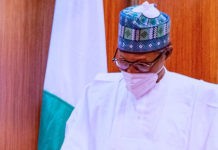