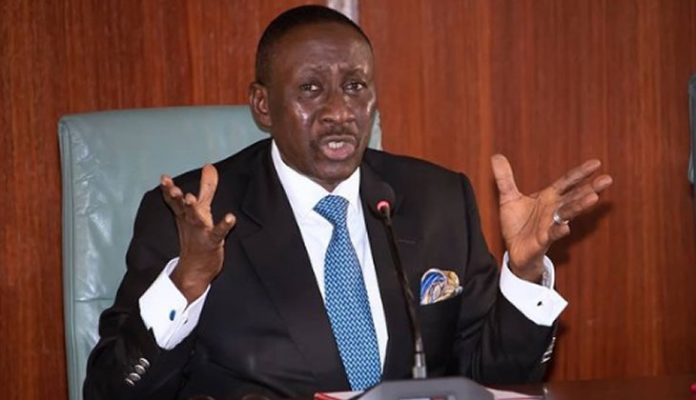 The National Security Adviser (NSA), retired Maj.-Gen. Babagana Monguno, has approved the appointment of Zonal Coordinators for the National Centre for the Control of Small Arms and Light Weapons (NCCSALW).

The National Coordinator of the Centre, retired Maj.-Gen. Abba Dikko, announced the appointment in a statement by the Head, Strategic Communications of NCCSALW, Air Commodore Ewejide Akintunde, on Saturday in Abuja.

Dikko said the appointment of the Zonal Coordinators for the six geopolitical zones was in pursuant to the mandate of the centre and to further operationalise its activities towards the eradication of illicit small Arms and Light Weapons (SALW) nationwide.

He said the appointed coordinators comprised senior retired officers from the security agencies.

According to him, the appointees include; retired AVM HU Mohammed for the North-West Zone; retired Maj.-Gen. Hamza Bature for North Central and retired Rear Adm. A.S Mohammed for North East.

The national coordinator said the appointees were qualified senior experienced officers from the security agencies selected to administer the affairs of the centre at the sub-national level.

According to him, the appointment closely follows the approval for the establishment of Zonal Centres in the six geoplolitical zones namely, Kaduna, Minna, Maiduguri, Ado-Ekiti, Enugu and Calabar.

“The appointments were done in a bid to ensure the attainment of the Centre’s mandate in ensuring an arms-free society,” he said. (NAN)