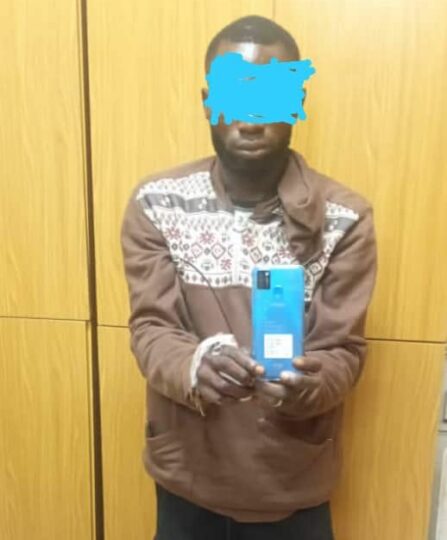 Muhammed was arrested by operatives of the Lagos State Rapid Response Squad (RRS) at the weekend and arraigned in court.

He was arraigned on two count charges of ‘Stealing’ and ‘Conduct likely to cause breach of public peace’ punishable under Section 287 of the Criminal Laws of Lagos State 2015.

The convict,  of no fixed home address was arrested under the Ojota pedestrian bridge by the RRS team on routine surveillance patrol, after his gang violently, robbed and dispossessed a pedestrian of cash, Infinix android phone and hand bag.

Complaints have been rife on the illicit activities of traffic robbers along the axis promoting an increased presence of the RRS teams around the route Ojota, Maryland, Ketu, Mile 12, China Town, Abiola Garden and other black spot areas across the State.

In a related development, one other suspect, namely, Lukmon Ojo ‘M’ (25yrs) who was also arrested over the weekend by RRS monitoring team for loitering around ‘Abiola Garden’ was charged for conduct likely to cause breach of peace and sentenced to one month imprisonment with N50,000 option of fine .