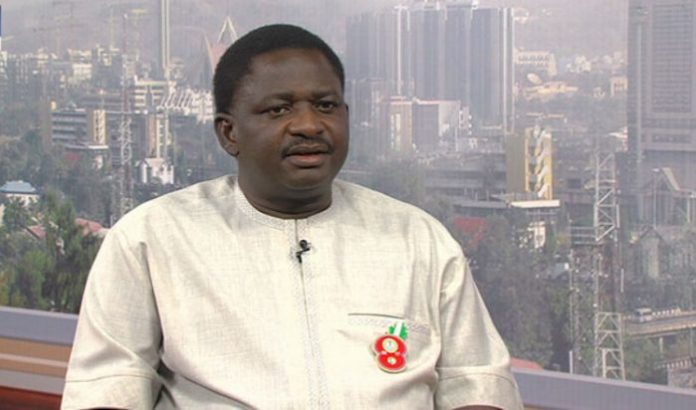 Femi Adesina said heavens won’t fall over the current situation of fuel scarcity and Nigerians will survive like always.

The presidential aide stated this on Thursday via his article titled “KNOCK, KNOCK. WHO’S THERE?”

Adesina noted that there were cases of bad fuel before in Nigeria and Nigerians survived.

“There were cases of bad fuel before in this country. We slept for days, weeks on end at petrol stations, queuing for fuel. We survived. We will survive again. Las las,” Adesina stated.

Please read the full article below:

It’s obviously not the easiest of times in our country currently, what with severe fuel scarcity exacerbating the other existential challenges we have been coping with. In some areas, there’s no fuel, no electricity, thus translating to a severe energy crisis.

Yet some other people have children, wards, dependents, relations in Ukraine, currently being bombarded by Russia.

I have one, daughter of a family friend. When I spoke with her last week, she was hiding in a bunker, talking in whispers. But amidst it all, no fuel, no electricity, anxiety about Ukraine, general insecurity, Government continues to work. The Heavens won’t fall, and sanity would be restored. The current situation is called SNAFU: Situation Normal All Fouled Up. Normalcy will definitely return. “Be patient, my soul. Thou hath suffered worse than this.” (Thomas Holcroft).

“Why are you downcast, O my soul? Why the unease within me? Put your hope in God, for I will yet praise Him for the salvation of His presence.” Psalm 42:5.

President Muhammadu has promptly approved the sum of $8.5m for the evacuation of Nigerians in Ukraine. Good. That’s what a responsible father does to family members in distress. He’s also working night and day, ensuring the country has fuel, power, infrastructure, and all the good things of life. Be patient my soul…

Knock, Knock, Who’s there? Yes, do you remember the title of that book by James Hadley Chase that we read in the 70s and 80s? Were you old enough then?

Do you also remember the song we used to listen and dance to then? Written by Aaron Schroeder and Sid Wayne, released in 1959 by Isley Brothers, and it became a global hit. Were you old enough then?

“I’m gonna knock on your door, ring on your bell
Tap on your window too,
If you don’t come out tonight when the moon is bright
I’m gonna knock and ring and tap until you do.”
Are you like King Lear at his gloomy worst? I’ve come to knock on your door. Are you saturnine and lugubrious ‘cos there’s no fuel, no light, no power? “Dem go reach bed power no dey, shuffering and shmiling ,” Fela Anikulapo-Kuti had sang long ago. “Be patient my soul, thou hath suffered worse than this.” There were cases of bad fuel before in this country. We slept for days, weeks on end at petrol stations, queuing for fuel. We survived. We will survive again. Las las.

I’ve come to knock and ring and tap on your door today, to remind you that it is not all doom and gloom in our country. However overcast the sky is, there’s always a shimmer of light. And that was what we were shown a couple of weeks back, when the Minister of Budget and National Planning, Zainab Ahmed, accompanied by Works and Housing Minister, Babatunde Raji Fashola SAN, and their other counterparts addressed a town hall meeting on infrastructure financing and human capital development. It was like streaks of light in an overcast sky.

What did the Ministers tell us, which should kindle the joy kiln in our hearts, despite the seemingly encircling gloom?

Between 2019 and 2021, the Finance Minister said, about N78 billion worth of tax credits were issued to investors under the Road Infrastructure Development and Refurbishment Investment Tax Credit Scheme (RITCS). President Buhari approved the building of 19 roads covering 769.16 kilometers, located in 11 States across the six geo-political zones in 2019, under the scheme.

In 2021, the President approved 14 additional roads, bringing the total to 33, covering 1,564.95 kilometers in 19 states across the country. Work is going on at steady pace. Will any other government come, and start rebuilding those roads again? No, they would have become legacy projects, for the good of Nigerians.

In housing, said Minister Ahmed, mortgage-based affordable housing scheme has recorded over 13,542 houses. The perpetual cynic would say; what is 13,542 in a sea of millions of Nigerians without affordable houses. That is just a beginning, and because government is a continuum, others will come and build on the success. Incrementally, we will eventually get to where we are going. No single government will solve the problems of a country within its time in office. It will do its level best, and others will continue.

There is the Presidential Infrastructure Development Fund (PIDF), under the National Investment Sovereign Authority (NSIA), with a stock of $300 million for key infrastructure projects. They include the Lagos-Ibadan Expressway, the Second Niger Bridge, and the Abuja-Kano Expressway. All projects are in different stages of completion and are due for commissioning within the lifespan of the Administration. Don’t forget that in the past, the funds would just have been pocketed by government officials, and contractors who would be mobilized, and refuse to deliver, yet life would go merrily on.

To also lift your gloom are infrastructural works in the health sector. Three projects worth $22.5 million easily come to mind. The NSIA-LUTH Oncology Centre, which has provided service to over 4,000 cancer patients since it was commissioned by President Buhari. The NSIA-FMCU diagnostic centre in Umuahia, and NSIA-AKTH, Kano, which have provided services to over 47,000 patients. Who feels it knows it. Those patients and their relations will probably never join anyone to say the Buhari government is not doing anything, as some wailers do.

The Sukuk was introduced as a financing window for infrastructure in 2017. Under it, the Ministry of Finance has given the Federal Ministry of Works N362.56 billion to fund key road projects.

Shake off your gloom, again I say. Between November 25 and December 13, last year, this Administration handed over 941 kilometers of roads connecting 10 States in five geopolitical zones of the country. We are making progress despite all odds, I tell you.

All these projects mean jobs for different kinds of professionals and artisans. It means good business for those who deal in construction materials. It affects the economies of the local communities and reduces commuting times by several hours. Somebody said recently that the Loko-Oweto bridge, which connects Benue and Nasarawa to the eastern part of the country has reduced travel time from six hours to about two hours. Why then won’t we be happy, despite all?

Fuel crisis will come and go. Energy crisis will be resolved. Nigerians who appreciate good things will be made happy progressively. That is is why I’m knocking on your door. Ringing on your bell. Tapping on your window too. And if you don’t come out to enjoy the bright moonlight, “I’m gonna knock and ring and tap until you do.”