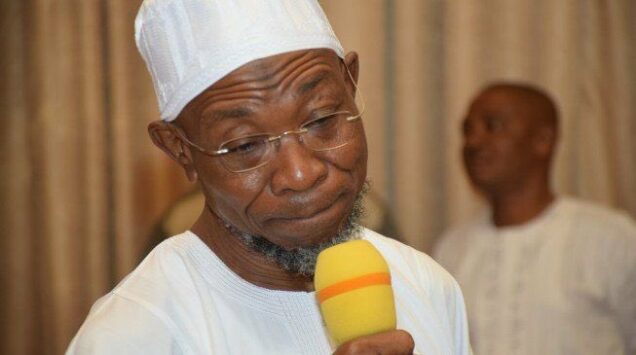 Results from wards in the direct primaries, showed that Governor Adegboyega Oyetola coasted home to victory to disgrace Aregbesola.

Aregbesola had taken a swipe at the APC National Leader, Asiwaju Bola Tinubu, saying he is playing God and vowed to ensure that Oyetola did not emerge winner in the primaries, supporting Adeoti instead.

A twitter user, Folashade Okunola said “He just start, he never see anything.”

Femi Sunday stated: “A great lesson. You don’t bite the finger that feeds you when you are full. Imagine calling Asiwaju atole. Quite outrageous and disrespectful.”

Sulaimon Adenuga tweeted: “After the Primary Election, we will now come out in full force against Aregbe but for now let’s still focus on the primary election.”

According to Emerald, “Oyetola that doesn’t have structure 4 years ago is way bigger than Aregbe today 💃🏾💃🏾💃🏾 God is Good!!!!”

As for David Abdulrazak Atta, “If Aregbe loses today, his political career is over, both from the front (Oyetola) and the back (Tinubu)… This thing that power does to men, may it never do it to me.”

Ade Ori Okin wrote: “Baba Kabiru just ended his political career not only in Osun State but in Nigeria by himself. Politics is a dirty game, can you imagine Gboyega Oyetola is now bigger than Aregbe in osun?”

Jamiu Julius Adebayo wrote: “Aregbe started losing this primaries the moment he came out with that video rant. Court of public opinion counted against him.”

As for Valiant Samson Idowu-Alaba, “Aregbe went to court over party structure, he lost twice. He’s losing today heavily. If he contests the outcome in court, he will lose. He will lose also in the July general election. As it stands, he’s a dead man walking in Osun state!”

As for Chinedu Ekeja, “So ridiculous how Nigerian kingmakers failed to learn that a fish can’t be a fish anymore outside water. Aregbe is learning the hard way.”

According to Laddo, “Aregbe has every right to have issues with Tinubu, yes it happens in politics but the way this Baba Kabiru went about is not only stupid but also so classless… and to think He is a federal minister is utterly shameful!”

Adenrele Babatunde added: “Hmmmm.. you’re absolutely right on those things. But Aregbe has been going about saying he didn’t follow his legacies and I kept wondering what legacies? Half salaries or high-handedness on Schools in Osun?”

Fat bellied gunner wrote: “There was pot-hole in front of government house for 8yrs of aregbe. Oyetola May not have done much but believe u me, he is better dan Aregbe who was taking loans and owing workers. This man now has debt to workers n creditors to deal with.”